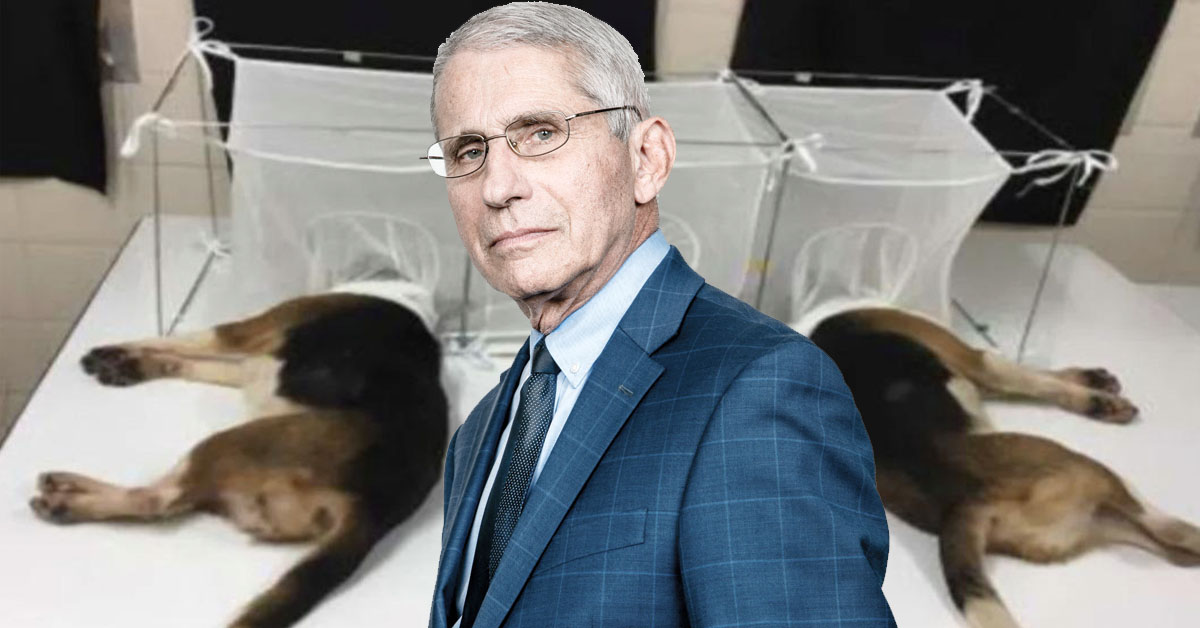 The same doctor that would call you and me "heartless", has been exposed for one of the most egregious violations of common decency imaginable: puppy torture. The White Coat Waste Project is a taxpayer watchdog organization that launched themselves into the national spotlight last week for exposing Fauci, revealing documents that they’ve obtained through the Freedom of Information Act.

These texts disclosed that the NIAID (led by Fauci via the NIH), used $1.68 million in taxpayer funds to force feed experimental drugs to healthy beagle puppies, "de-bark" them, and expose their limp bodies to starved and parasite infected sand flies, which would then gorge on their flesh until the puppies died.

“Our investigators show that Fauci’s NIH division shipped part of a $375,800 grant to a lab in Tunisia to drug beagles and lock their heads in mesh cages filled with hungry sand flies so that the insects could eat them alive. They also locked beagles alone in cages in the desert overnight for nine consecutive nights to use them as bait to attract infectious sand flies.”

For those unfamiliar with the process of “de-barking”, or vocal cordectomy, the beagles, aged 6-8 months, were strapped to tables, and their vocal chords were surgically removed to ensure that they were mute during their live consumption at the hands of festering insects.

The 48 beagles would then scream in silence so they do not disturb researchers, a process which may have even been more painful than the experiment itself. When the puppies finally succumbed to the torture, they were then slaughtered by the researches and disected.

To add insult to injury, for anybody that may be disturbed by the notion of taxpayer funded puppy torture, Justin Goodman, a WCW Project vice president, told journalists that the testing likely didn't follow any scientific rationale, adding that the FDA’s current stance on the testing on canines is that it isn't usually compatible with human-drug interaction, and that the EPA and the VA have already ended dog testing.

By the time they were conducted, the experiments were entirely unnecessary, as the drug being studied had already been tested on several different animals with more compatible biologies, and confirmed separately through more humane research. Worse yet, this was not the first known experiment conducted by the NIAID on puppies, nor the second or third, but the FOURTH. Beagles are allegedly chosen on a consistent basis because they are especially docile and trusting.

Naturally, these experiments have not gone unnoticed. Congressmen from across the aisle, including nine Democrats, have joined a team to hold Fauci accountable for this abhorrent act of violence. If we can’t trust this man with puppies, why are we letting him dictate our policies for pregnant women and children?