14 Democrats in the New York Senate are calling for an end to Governor Cuomo's Emergency Powers for the handling and misrepresentation of his COVID response. A top aide to the Governor revealed that the Cuomo Administration withheld data from the public and the federal government related to nursing home deaths. Several are blaming Cuomo for the deaths of the elderly in those facilities. If you remember, Governor Walz had a similar policy of putting COVID positive patients in long term care facilities.

The group of Democrat senators are calling for an expedited repeal of Cuomo's powers, which are due to expire on April 30th. They issued a joint statement:

Without exception, the New York State Constitution calls for the Legislature to govern as a co-equal branch of government. While COVID-19 has tested the limits of our people and state-- and, early during the pandemic, required the government to restructure decision making to render rapid, necessary public health judgements-- it is clear that the expanded emergency powers granted to the Governor are no longer appropriate.

Meanwhile in Minnesota, vulnerable Democrats like Rep Julie Sandstede (DFL-Hibbing) are betraying the trust of their voters and protecting Governor Walz' Emergency Powers. Sandstede has made numerous references recently to "restoring the co-equal branch of government", but so far has fell short of voting to restore our democratic process. It appears she is more radical than a New York Democrat.

To her east and south, Reps Dave Lislegard and Mike Sundin have also joined in allowing Governor Walz' Emergency Powers to continue despite the incredible abuse and damage he's left to our economy and young adults who have been forced into two lockdowns in the 11 months of Walz' "emergency".

The legislature has shown that it can function during the pandemic. Legislators are meeting regularly right now virtually to conduct business and have already passed legislation this year. The idea that the Governor needs to hold on to his Emergency Powers any longer is ridiculous; even dangerous. Some experts warn that the "worst days" lie ahead of us, which suggest Walz will shutdown our economy for a third time and force our youth into a third lockdown.

Action 4 Liberty Is Going Directly to Their Voters

We deployed a team of doorknockers and operators up north to reach out to every voter in the districts of these vulnerable Democrats. After a little over a week of door knocking, our data suggests that politicians like Julie Sandstede are out of step with her constituents. We're talking with hundreds of voters every day, growing our database, and asking folks to contact their legislator.

Our team doesn't have it easy, by the way. Here's this morning's weather report for Hibbing: 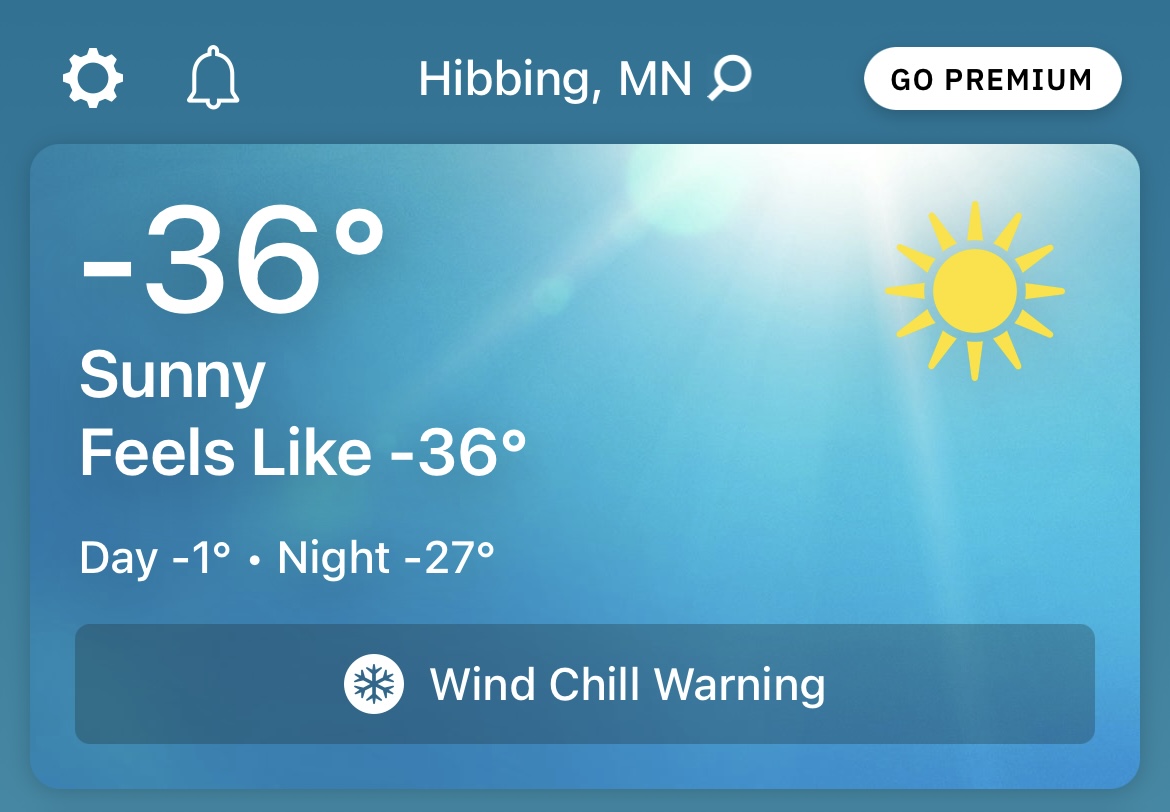 But that won't stop us from talking to every voter in these districts. Politicians like Julie Sandstede can continue voting worse than a New York Democrat, but she'll never get re-elected again. It's time politicians like her do the right thing, and End Walz' Emergency Powers once and for all.

If you would like to help out our field operations, cover their fuel, buy firewood for the rental house, please consider a $100, $50 or even $25 donation to our Stop Walz' Fund.