Minnesota's Attorney General Keith Ellison appeared in front of the MN House State Government and Finance Committee to argue for a budget increase for the AG's office in the upcoming biennium. The Legislature, during odd numbered years, constructs a two-year budget that starts in July. Ellison believes that his office has a need for a roughly 8% increase in their operating budget.

What would the budget go towards? Ellison stated in committee that his office has an increasing workload, which includes enforcement of the Governor's executive orders. He argued that the AG's office needs to retain it's staff, which according to him, has been in contact with over 900 businesses in the state regarding compliance of the Governor's executive orders and has sued 12 of them.

Rep Steve Drazkowski (R-Mazeppa) asked Ellison if he views the Governor's orders as law, which according to Minnesota's Constitution, is the sole responsibility of the legislative branch. Ellison responded that he indeed believes the Governor has the ability to unilaterally create laws in the state. How extreme of a statement is that for Minnesota's top legal officer!

Senate Majority Leader Paul Gazelka stated in December that Senate Republicans will look to cut the Attorney General's budget. We'll see if they follow through with that in the coming months.

Here's the video of Committee Hearing: 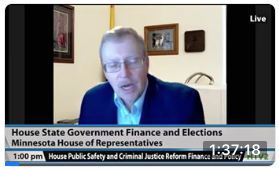