At What Point Are Republicans to Blame for High Taxes? 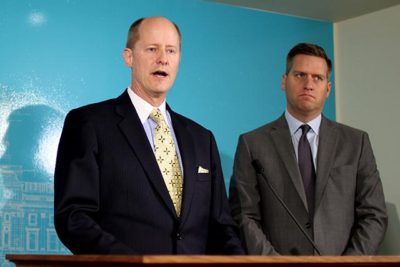 The chatter at the Minnesota Capitol as the Legislature reconvenes from its Easter break is that Republicans and Democrats are nowhere close to bridging the $2 Billion gap between the Senate Republican budget and Governor Walz. For those only consuming the mainstream media narrative, it would appear this gap is worlds apart. We know otherwise.

Both the Republican Senate and Governor Walz have proposed to grow state spending tremendously and eat up the vast majority of the $4 Billion projected budget surplus. Both Republicans and Democrats want to tax Minnesotans more when it comes to prescription opiod drugs. Walz takes things a step further by wanting to increase the gas tax by 70 percent and keep the health provider tax that is paid by sick Minnesotans. When it comes to new taxes, Senate Republicans score better than Walz.

However, we've been involved at the Capitol long enough to see many of these same Senators deal with a DFL majority in 2013 who massively increased taxes on top wage earners and create a fourth income tax bracket. The 2013 Democrat tax bill brings in billions of new revenue to the state government each biennium which now Republicans and Democrats alike incorporate into their spending proposals. Since the tax went into effect, the Republican Senate has never proposed eliminating or even shrinking the new tax bracket the DFL created.

Minnesota is ranked the "least tax friendly state" by Kiplinger. At what point do Senate Republicans get blamed for these high taxes? Imagine you run a business and the former CEO enacted a wasteful company-wide green energy program funded by its employees. If you continued spending the money each fiscal year after you took over, wouldn't you share blame for not ending the program and removing the financial burden on your employees?

Senate Republicans should be proposing a budget that shrinks the size and scope of government and eliminates the taxes created by Democrats. If we really want to fight against the liberal agenda, then we must go on the offense when it comes to taxes and spending.