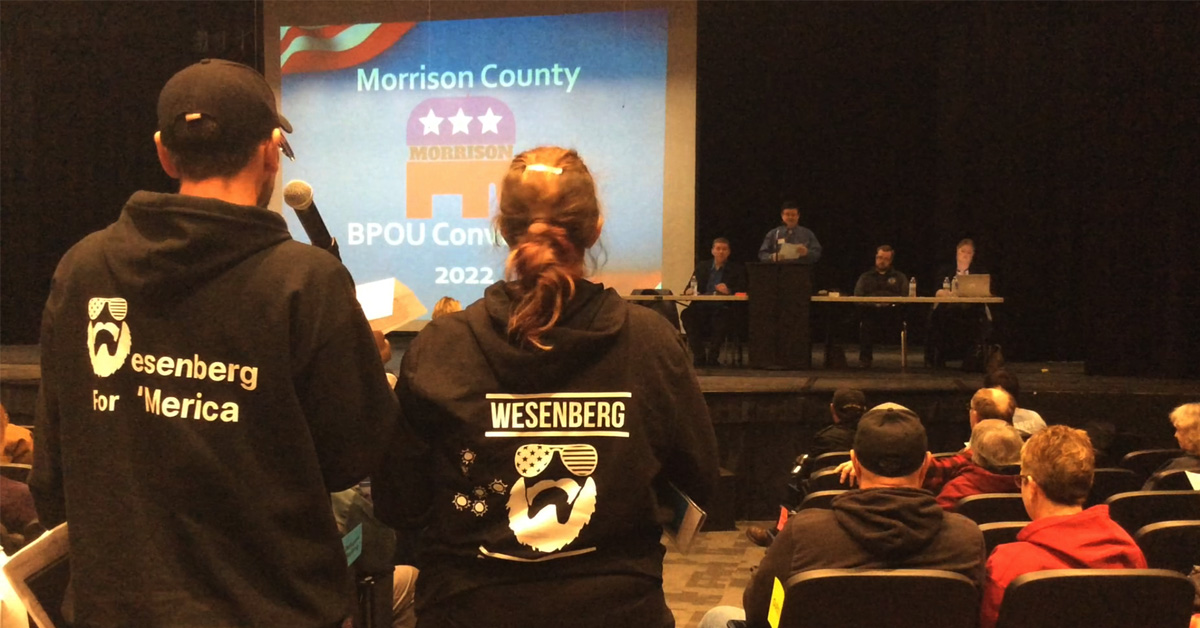 Many new activists, including ones that Action 4 Liberty drove to attend precinct caucuses, are experiencing an unwelcoming environment at their local conventions. Which is absurd considering the Republican Party hasn’t won a statewide election in 16 years – they should be welcoming new activists with open arms!

I get emails daily about this problem, and for the most part, chalk it up to the old guard protecting their little “fiefdoms”.

But a more egregious problem occurred in the Morrison County Republican Party starting on caucus night. Several new delegates were taken off the list by the Party executives after being duly elected on caucus night (in accordance with state law). In some cases, names were added as delegates after the fact, including the wife of the local state representative, Ron Kresha. This not only violated the state party rules, but also was illegal.

The Dr. Neil Shah gubernatorial campaign immediately noticed the problem when the state party provided delegate lists to them. They had an extensive ground game in Morrison County and their activists were missing from the delegate lists.

Shah, who is a proponent of election integrity, realized that a unit of the Republican Party was disenfranchising the voice of new conservative activists. That’s a big deal! 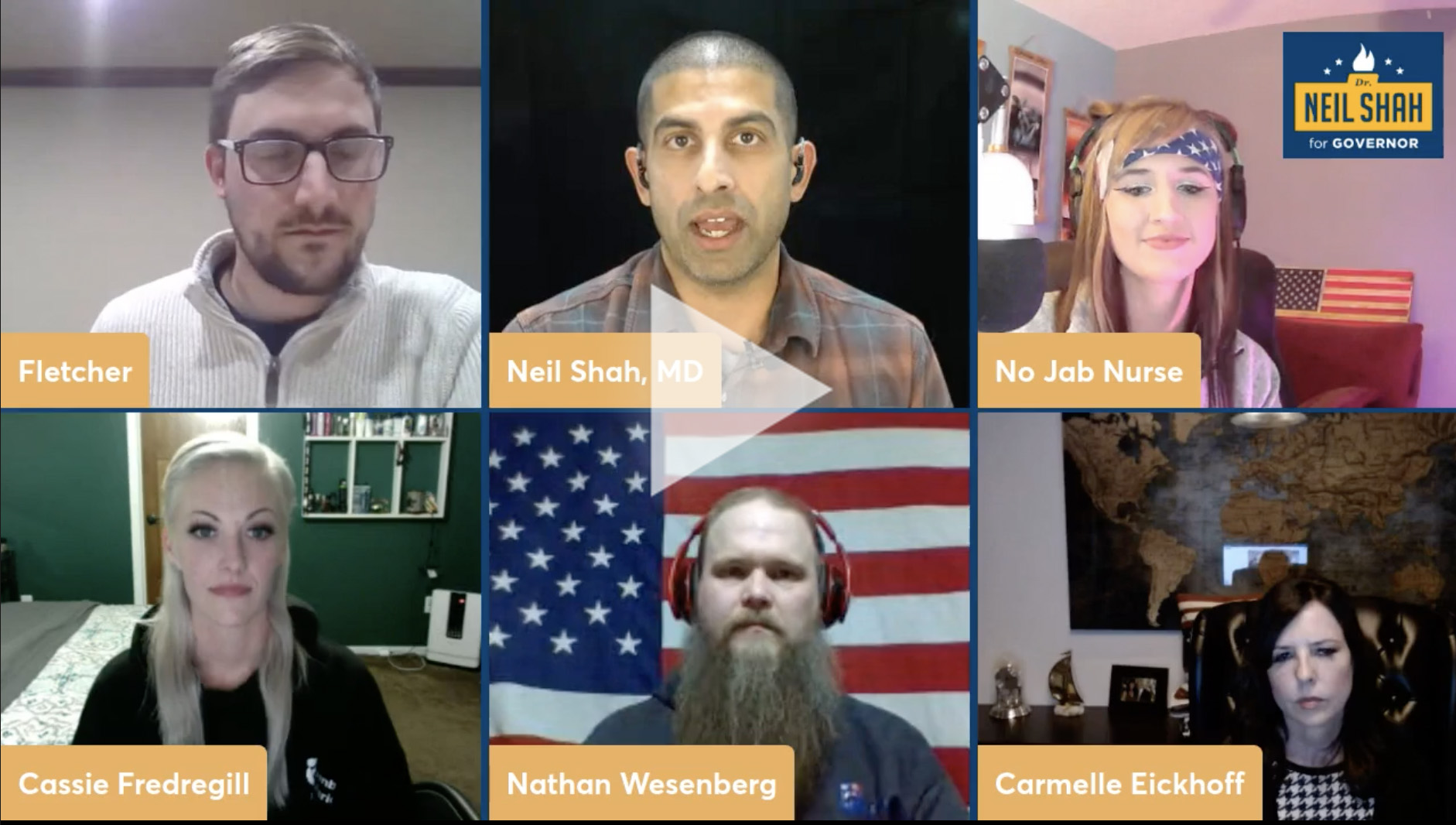 A conservative, outsider senate candidate named Nathan Wesenberg (Little Falls) also had an impressive ground game in Morrison County. When he learned of the issues with Morrison County, he demanded delegate lists and was not provided with them for nearly a month.

Candidates are entitled to the delegate lists since the delegates are the ones who decide who the Republican Party endorses as its candidates.

The motivation to disenfranchise the new activists, which would directly hurt the Dr. Neil Shah campaign, Nathan Wesenberg for Senate and, from my research, even the Mike Murphy campaign, is unknown. But the Chairwoman of Morrison County GOP is a paid staffer for Paul Gazelka’s gubernatorial campaign. The cheating certainly put things in favor of Gazelka’s campaign since new, conservative activists are a big threat to his prospects of winning the Republican nomination.

We dug into the Campaign Finance Records of Morrison County GOP and found that their bank account acts as a slush fund for Gazelka and friends. 97% of money raised in the rural party unit comes from lobbyists and Special Interests outside of the district. In fact, a $1,500 donation came from a DFL-aligned law firm that was used to file an erroneous complaint against Action 4 Liberty (which we beat). And 91% of expenditures went to golf expenses in 2021.

More importantly, Morrison County GOP bundled the money from lobbyists and Special Interests and donated $10,000 to Paul Gazelka’s Senate account, which was then terminated and transferred to his gubernatorial campaign.

We exposed this corruption in an article we wrote on February 21st entitled Corruption in Morrison County GOP. Evidence showing that Morrison County disenfranchised conservative activists was also provided in the article through signed affidavits and images of delegate rosters from caucus night.

Trying to disguise the blatant corruption, the Republican Party decided to have Congressional District 8 GOP run the Morrison County convention on March 12th. And Paul Gazelka released an email excusing the behavior of the party leaders in Morrison County – an area he represents as state senator.

Instead of fixing the errors caused by Heffron on delegate lists before the convention, the Republican Party decided to use the convention as the means to settle the score. So they sent out convention calls two weeks ago to the list of delegates they had – which means the disenfranchised new activists did not receive the call. So much for growing the Party!

Fortunately, the Wesenberg campaign stood up for these new activists and alerted them to the date/location of the Convention. They showed up and dedicated volunteers worked with the credentials committee to restore their delegate status. In fact, most of the delegates who were added by Heffron after caucus, like the wife of Ron Kresha, were removed as delegates. Huge success.

So Wesenberg supporters went to the convention floor to stop further corruption by the Party. They had a majority of the delegation at the convention. But the Congressional District 8 appointed chair, Justin Krych, from the start, wouldn't allow a new chair to be elected by the delegation floor. He later refused to acknowledge multiple motions and points of orders by the conservative activists. At one point he threatened to shut down the convention and remove delegates. When delegates called for a vote to appeal the ruling of the chair, Krych ignored the request.

Here's a snapshot of one of the battles...

In other words, Krych ruled the convention with an iron fist and removed the very important democratic function of conventions that both the Republican Party rules support and are embedded in Robert’s Rules of Order that govern these types of meetings.

But this fight against corruption from the new activists, put the Party on high alert. Cheating was not going to be tolerated. Their voices matter. And as mentioned above, they had a majority.

And thank God they had this mentality because a massive error happened later in the day when votes were being counted for State Delegate positions. A volunteer with the Shah Campaign insisted that he be present during the counting, but was initially told by the Head Teller that he was not allowed to observe. It’s the equivalent of throwing out a poll watcher on election day. The 22 delegates who were to be selected from Morrison County get to attend the Republican Party Convention in Rochester in May to decide who to endorse for Governor.

Luckily, the convention tellers, who came from Crow Wing County, were okay with the observer’s presence and it was determined he could be in the ballot counting room. I spoke to one of the tellers who stated that he and the others were big advocates for election integrity – thank God!

At the beginning of counting votes, 70 ballots were questioned because they contained the name of a new conservative activist, Dan Schilling, whose name was not on the official state delegation registration sheet provided to the tellers from the Party. A question was raised if the 70 ballots should be “spoiled” because once the votes for Schilling were removed from those ballots, they only had 21 names on it. Congressional District 8 GOP created a rule that required all ballots to have exactly 22 names on them.

The Shah campaign volunteer noticed that this was not accurate and the tellers quickly agreed. The convention chair came into the room and determined that Schilling’s name was indeed on the roster on the convention floor and should be counted. Thanks to the tellers, Shah volunteer and the chair, the 70 ballots remained in effect. Here’s the kicker, Dan Schilling ended up being the top vote getter for state delegate in all of Morrison County. Had the tellers and observers not agreed on this omission error, Schilling would have been disenfranchised because some how his name wasn’t on list provided to the tellers. More importantly, all the votes of the other people on the 70 ballots would’ve been thrown out as well.

New activists and Shah supporters ended up winning 17 of the 22 delegates positions. Gazelka delegates only won 5. If the 70 ballots would’ve been thrown out, Gazelka would have likely won all 22. Imagine Trump ballots being thrown out in a swing state and replaced with Biden ballots. These tactics change elections! And it’s why it’s vital that good people sign up to be election judges and poll watchers.

In the end, good prevailed because new activists were organized and knew the rules. They overcame corruption and a convention chair who ignored the democratic process. Disenfranchised new activists had their delegate statuses restored and the names of delegates added by Heffron were removed.

But I fear the cheating isn’t over. In the case of Nathan Wesenberg, the Insiders realize he has done an extraordinary job of organizing conservative activists. I wouldn’t be surprised if they refuse to hold an endorsing convention for Senate District 10 – a tactic that would force a primary where the Republican Party wouldn’t have an endorsed candidate to support, and thus welcome big, special interest money to help bolster the Political Class’ preferred candidate.

Here's the deal. A lot of people have woken up in the last two years because of COVID tyranny and a crazy election that put a bumbling, moron in the Oval Office. Both the Republican and Democrat Establishment in this state are doing little to give back the massive $12 Billion surplus, stop vaccine mandates, and make sure unilateral emergency powers NEVER HAPPEN AGAIN - all issues that new conservative activists demand.

The Political Class in Minnesota is threatened by all of us though. They know we are angry about how government has treated our liberties in the last two years. And they know we are organized. I remain optimistic that we will reclaim our liberties in this state because I see new conservative activists getting involved every day. If you recognize cheating, stand up against it and make your voice heard. We can turn things around in this state, but it requires good people to do something about it!

Missing information about your Convention? Click here to see the calendar.