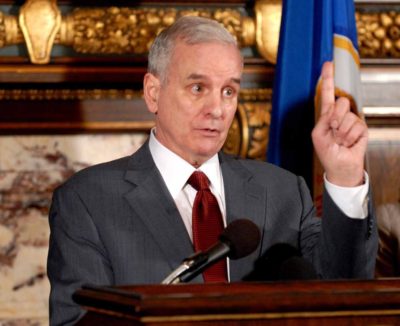 Governor Dayton is holding Minnesota taxpayers hostage by threatening to veto the Republican tax bill if the Legislature does not provide $138 Million to bail out a handful of school districts around the state. As it stands right now, the only thing necessary for the Legislature and Governor to do this session is to pass a tax conformity bill that would save Minnesota taxpayers severe headaches and money next year when they file their state taxes. Under current law, the state income tax forms do not conform with the new federal forms created with the Trump tax cuts.

The state faces a $329 Million surplus which in part is due to the new federal tax cuts. Both the House and Senate have passed their own tax bills, with the Senate bill ensuring 99% of Minnesotans don't see a tax hike. The two tax bills are currently being worked out in a joint conference committee. The deadline to pass laws is midnight on Sunday.

Dayton's threat is as extreme as it comes. If there is no tax conformity bill, millions of Minnesota tax filers will suffer and pay. Meanwhile, Dayton is asking those same taxpayers to bail out school districts who didn't responsibly manage their own budgets.

Action 4 Liberty believes the Legislature should send Dayton the tax bill immediately and refuse to pass any spending bill until its signed into law. Republicans should not cave to Mark Dayton.