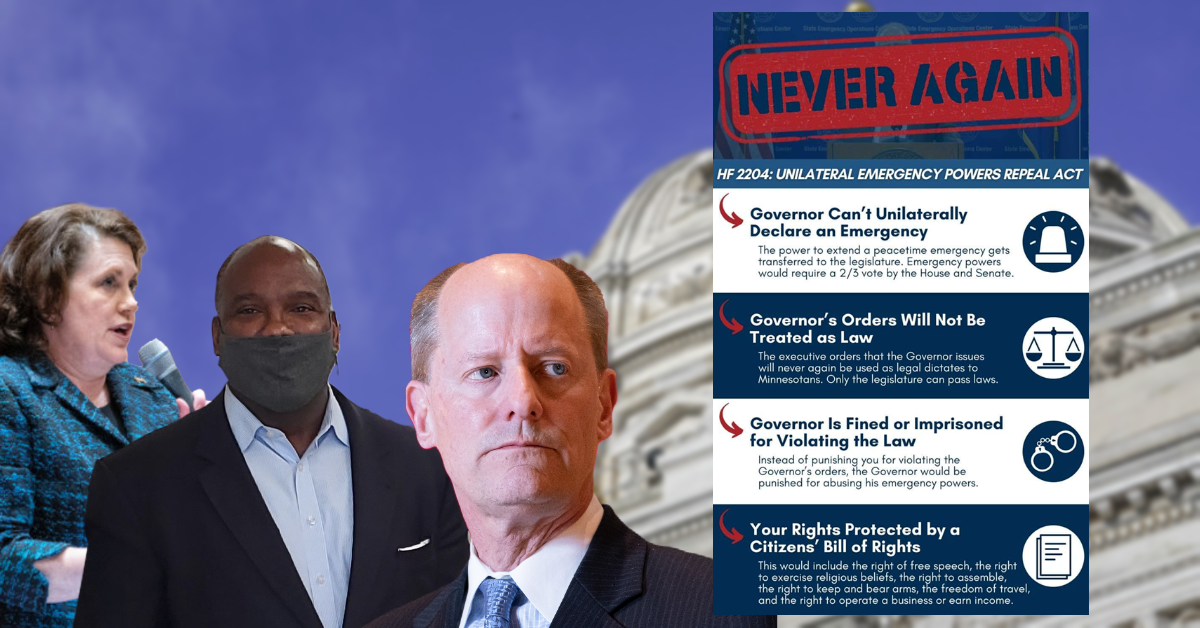 The tyrannical use of Emergency Powers to suspend the Constitution and trample on our rights in 2020 and 2021 has quickly become the issue of our time. Governor Walz unilaterally declared himself King - and under current law, operated as sole rulemaker of our state. We MUST ensure it Never Happens Again. But crooked politicians refuse to sign the Never Again pledge and lie about the importance of the Never Again Bill.

Merriam-Webster defines a dictator as “a person granted absolute emergency power.” Sound familiar? This kind of power being granted to a future governor for even ONE day could spell the end of our freedoms and liberties. Yet most politicians think the Governor should be able to unilaterally declare an emergency for 30 days.

The Never Again bill is the only proposal that completely strips the power of the Governor to declare Emergency Powers, and returns the government to our system of checks and balances which is enshrined in the Minnesota Constitution.

Here are some of the Debunked Arguments put forth by politicians about the Never Again Bill:

“The Governor Needs to Act Quickly, They Do Not Have Time to Ask for Permission”

Government NEVER acts quickly. It is inefficient by its own nature. Rapid decision-making by people in power over us is dangerous. That’s why the Constitution was written in a way for the legislative process to take time.

Imagine the Governor needed to deploy the National Guard for an emergency. It’s silly to think that the National Guard is ready to be deployed instantly with the signing of an executive order. Guardsmen have families and daytime jobs that prevent them from serving full-time. They are not a rapidly deployable force like the Navy Seals. When called upon, it still takes days to activate and fully deploy these brave men and women.

When the Never Again Bill is passed, the Governor may give a warning order to the National Guard, letting them prepare while he requests an emergency from the legislature. This is a healthy check and balance to ensure that the legislative branch of government remains in power.

“What About Floods and Tornadoes?”

2/3rds of the legislature is unlikely to deny that a flood or tornado constitutes an emergency. Until that power is granted to the Governor, there is nothing preventing local governments and citizens from taking their own precautions. Local governments exist to deal with local problems.

Sandbags can be filled and chainsaws can be run without a Governor’s orders. If an executive emergency is truly needed, it can be requested while local agencies and citizens deal with the problem first.

“If Nuclear Bomb Goes Off in the Twin Cities, We Won’t Be Able to Respond”

This is a classic strawman argument.

If a nuclear bomb is dropped on the Twin Cities, chances are we have bigger problems to worry about than our current structure of government (if it even exists). This argument is absurd and our laws should not reflect a scenario that has .0000001% chance of happening, when we know a Governor will use a virus to declare powers for a year and a half.

“It Takes Too Long to Assemble the Legislature”

A quorum of 50% of the legislature is required to be in attendance to be called to order. More than 50% of legislators live within a few hours of the Capitol. If that’s not quick enough, the legislature has set a precedent of meeting virtually over zoom – which can be organized in minutes.

While zoom floor sessions are not ideal, several lawmakers on both sides of the aisle had no problem taking advantage of them during the 2021 legislative session.

“This Bill is Not Ready for Primetime”

Prior to being introduced, it was reviewed by the Office of the Revisor of Statutes to ensure that the bill is workable. The only reason that it has not gotten a hearing is because Republican Leadership in the House and Senate dislike its author, Representative Erik Mortensen.

Don’t be surprised if you get any one of these excuses from a candidate or legislator. They’ve been coached to disavow any legislation that takes away their status and power.

Remember, HF2204 is the ONLY legislation that strips the governor of his ability to declare an emergency. If a true emergency is warranted, the new limited powers (coordinate with local and federal agencies) can be granted to the Governor with 2/3rds approval in both the House and the Senate.

In the situation where a governor is given emergency powers, they must abide by the Never Again act’s Bill of Rights. This means that a governor can not arrest business owners or hand out fines for violation of their executive orders. If they do, they’re the ones who are thrown in jail!

Be wary of candidates who tell you they oppose this legislation. Chances are, they are tyrant-wannabes who believe the governor SHOULD have the ability to act against their constitutional oath.