Democrat Leaders CROSSED A LINE today. They completely ignored the Rules of the Minnesota House in order to avoid hearing the Resolution to End Walz' Emergency Powers.

But thankfully Rep Erik Mortenson, on his first day in office, challenged the Democrats and made a motion to bring forward the Resolution. He believes what we all believe: there's no more important issue in Minnesota right now than Ending Walz' Emergency Powers.

A veteran legislator told Mort back in November that he should just be quiet and learn the process for the first two years. Thankfully Mort didn't listen to that swamp dweller!

Democrat leadership saw how effective your calls and emails were. They had a crisis on their hands last night. Which is precisely why they decided to ignore Mortensen's Resolution and motion today which violates the Rules of the House.

How do they expect us to peacefully participate in the political process if they just throw out the rules?!

So Mort made a bold move in his first speech in the Legislature and challenged Democrat leadership in front of all Minnesota. And when ruled out of order, he and others didn't quit!

WATCH HERE TO SEE HOW THE FLOOR SESSION WENT DOWN (INCLUDES OUR COMMENTARY): 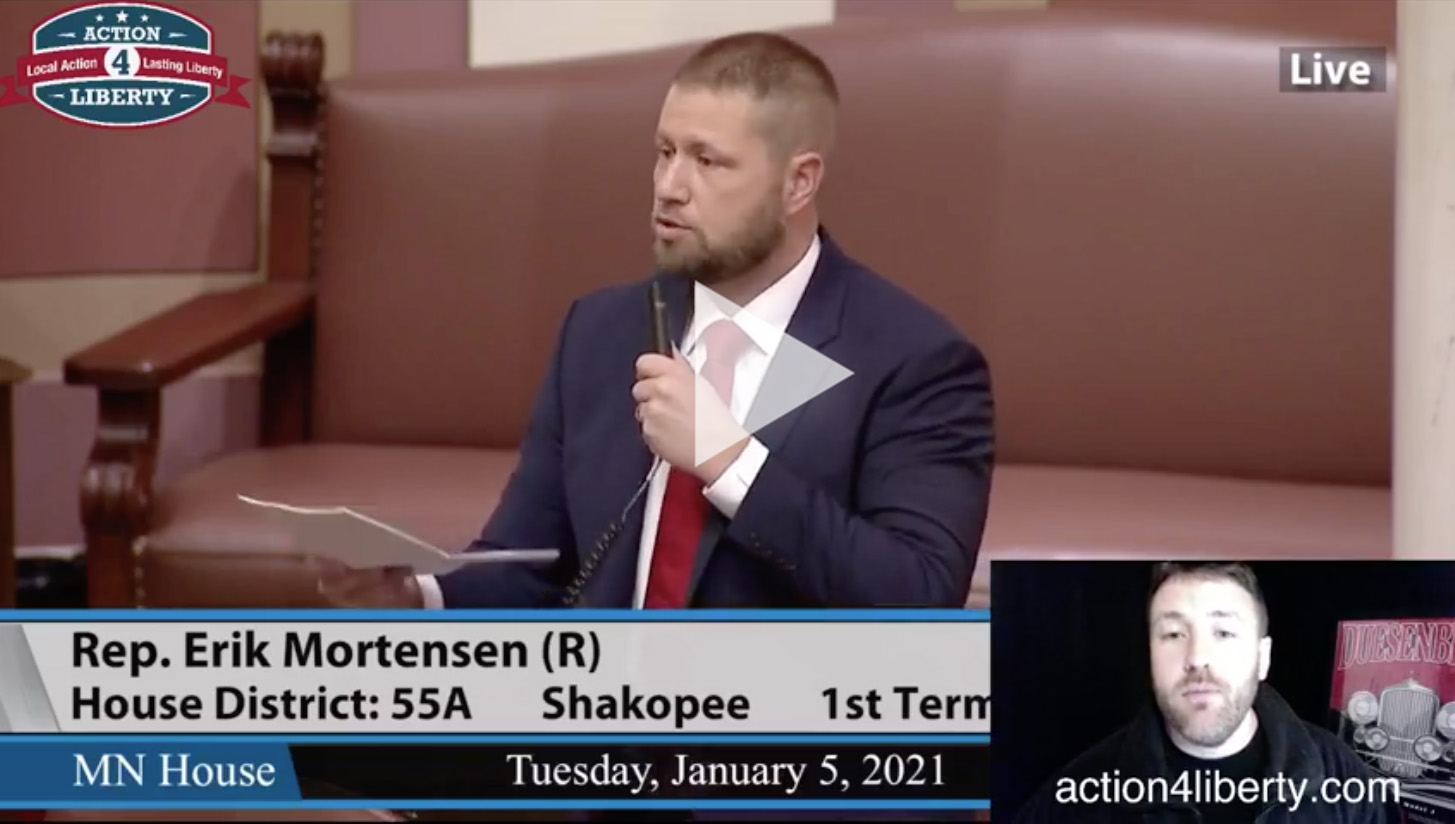 As you can see, Mort's motion was ruled out of order by the Speaker of the House. So Republicans quickly moved to challenge the ruling of the Speaker. If overruled, we would've got a clean vote to End Walz' Emergency Powers.

But it turns out that Reps Ecklund, Lislegard, Marquart, Pelowski, Sandstede and Sundin are all a bunch of FRAUDS! When their vote actually mattered to End Walz' Emergency Powers, they voted against their voters and their constituents.

Now comes the time for our pressure campaign. We will make sure every voter in their districts knows how their legislator is voting. And we have lined up digital ads, print ads, call campaigns and much more. Legislators like Sandstede, who won by only 50 votes in November, have two options: vote the right way and End Walz' Emergency Powers or start to see the pain from our massive pressure campaign.

It's going to be incredibly painful for Ecklund, Lislegard, Marquart, Pelowski, Sandstede and Sundin if they want to put Governor Walz' powers ahead of the needs of their constituents.

Democrat leaders will continue to do everything they can to avoid an actual vote by using parliamentary procedures. Including changing the House Rules to require a 60% threshold to bring the vote to the Floor. We'll hold Ecklund, Lislegard, Marquart, Pelowski, Sandstede and Sundin personally accountable if this passes.

We also now know that a water-downed, Fake End Walz' Powers bill is being drafted with help from Republican Rep Barb Haley. Democrat leadership stated this bill will likely get a vote in a couple weeks. This also MUST be opposed

You see why the team at Action 4 Liberty has to work around the clock in this fight? They are pulling every trick in the book.

I have to ask you for some help. We're on the goal line now; we're so close. Help us by doing one of two things. Support our pressure campaign by volunteering to make phone calls or by helping with a donation so we can hire more callers, buy more ads, and ratchet up the pressure.

YES, I want to Volunteer

I don't have the time, but would like to donate

We still need YOUR help to finish this off. We owe it to Larvita, Jane, Jeremiah, Lisa and all the other businesses who are under assault by Governor Walz. Let's have their back and End Walz' Emergency Powers once and for all.

These legislators can't outrun us forever. This will be up for a vote again soon. And as long as you help fund our pressure campaign or volunteer your time, we can assure you these legislators will feel the pain!

Please help put the pressure on these cowardly, fraudulent Democrats with a donation of $100. If that's too steep, $50 or $25 can go along way to holding them accountable. Want to help even more, consider a one time donation of $500. We need you on board!