As the vote to End Walz' Emergency Powers was going down at the Capitol and vulnerable Democrats like Julie Sandstede and Dave Lislegard were in the crosshairs, we learned from the Governors office that a "significant dialback of COVID restrictions" are going to be announced tomorrow.

It's quite clear to me that the pressure from you, and the hundreds of thousands of people who have joined this effort to End Walz' Emergency Powers, is working. Unfortunately, Walz once again wants to play politics over doing what's right. His announcement was made to release tension on his Party's most vulnerable members and provide them political cover.

So Sandstede and gang voted again to protect Walz' Emergency Powers this evening. Here's the vote. 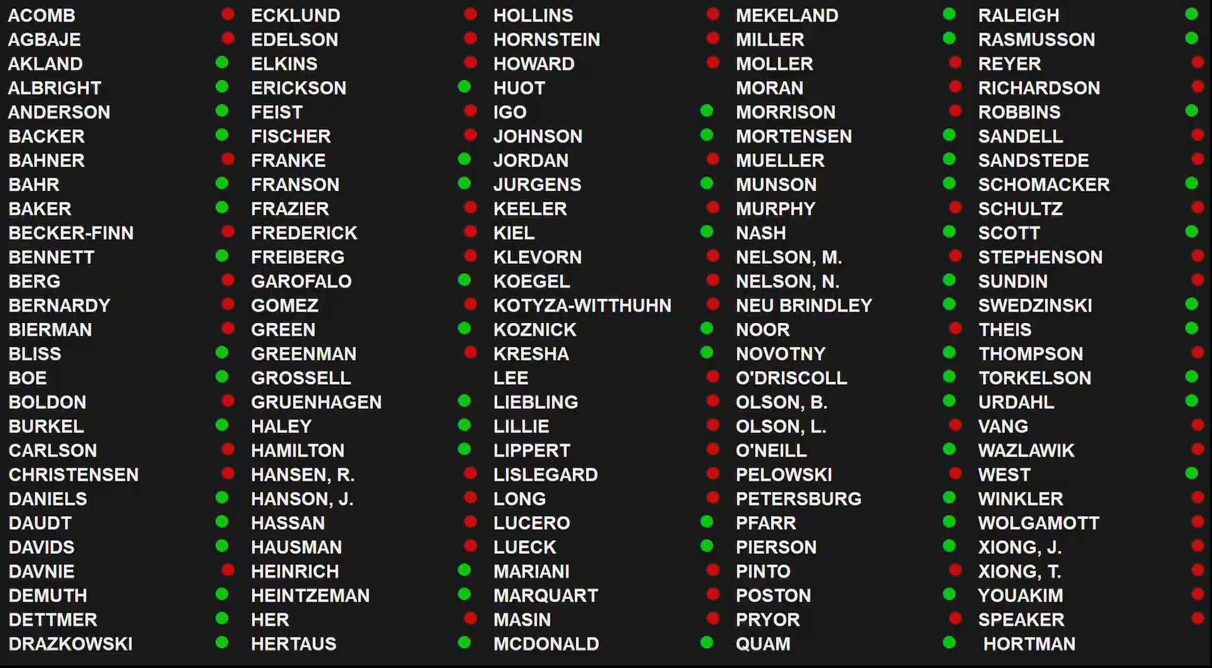 Now I don't know if Governor Walz and his team think that we'll just accept his dialback tomorrow and remove the pressure off of Sandstede, Lislegard, Sundin and the rest. If so, he couldn't possibly be MORE WRONG!

This just shows we are making progress. Our pressure works. We already knew that because I got a call today from the House Sergeant of Arms who said members of the Minnesota House requested us to take down our FB Ads against Sandstede and Lislegard.

I respectfully declined, of course! This is all it said: 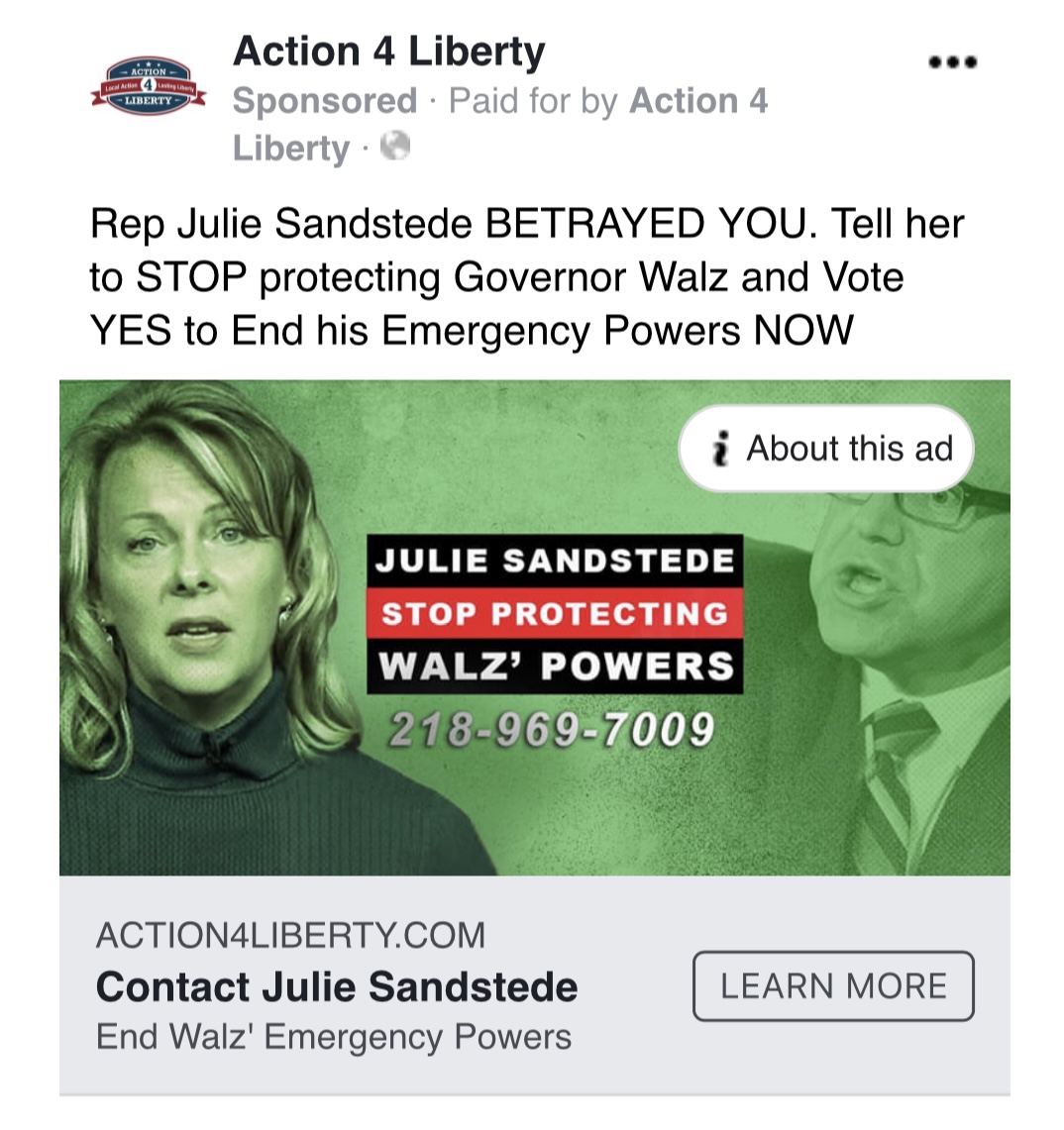 We're dead serious about this issue. We can't allow one person to create unilateral orders in this state that infringe on our liberties any longer. We will not quit until Walz' powers are gone and we ensure this NEVER HAPPENS AGAIN!

I told the individual from the Sergeant of Arms office that we don't have any sympathy for the enablers of Walz' Emergency Powers that have led to our businesses being shut down, harassed by government, and even sued by the Attorney General on behalf of the Walz Administration.

As long as Governor Walz' powers still exist, our rights can still be trampled on and business owners will still live in fear of future shutdowns.

So if these Con Artist politicians think that the fight is over, they are wrong. Meanwhile our team is knocking on thousands of doors every week. The leader of my team just asked for 3,000 new pieces of Sandstede literature this morning for the upcoming week. 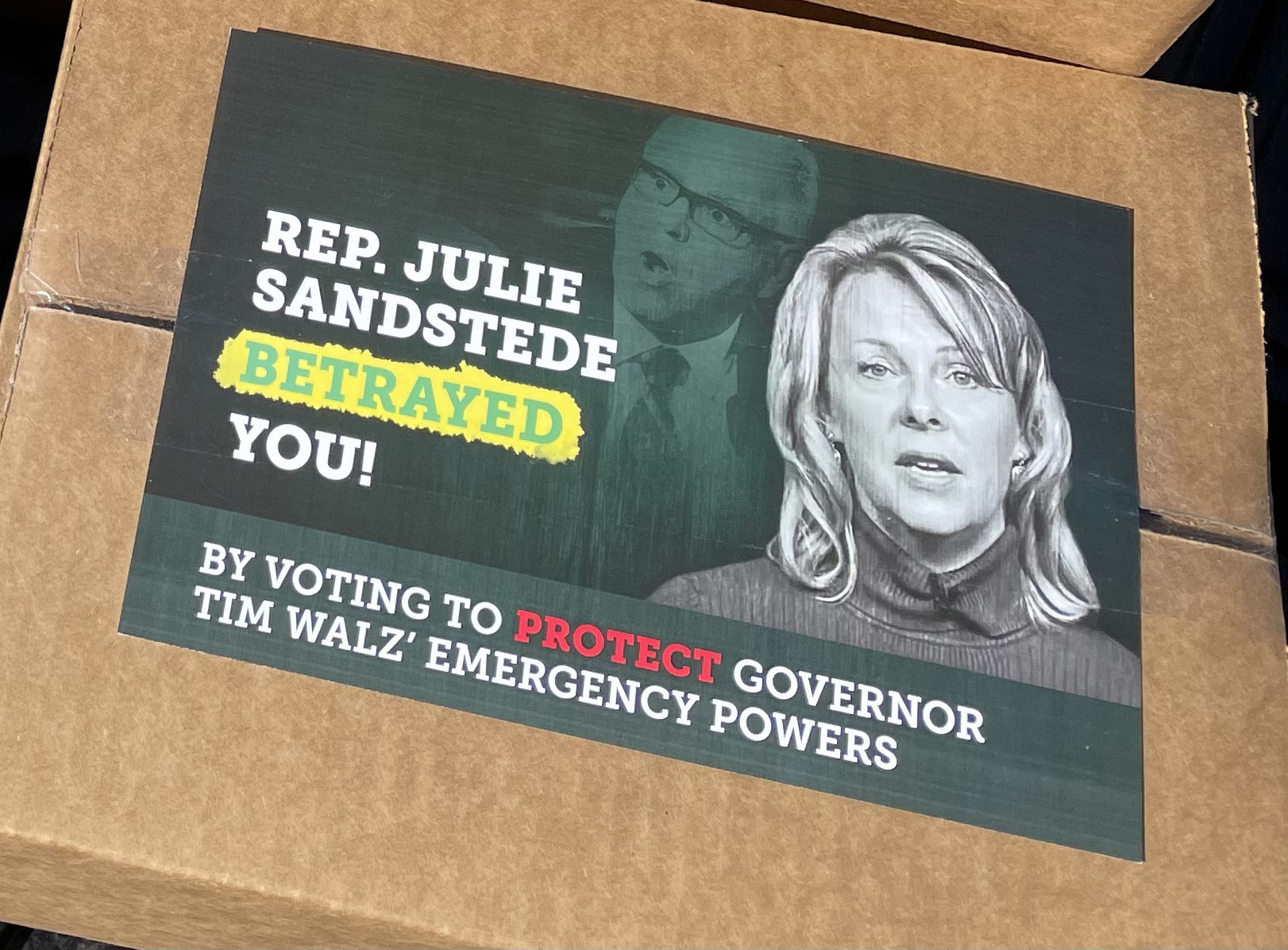 I want to thank all of you who took the time to email or call the legislators from our recent email. Reports we got back suggested that their inboxes were overfilled with your messages and voicemail boxes got overwhelmed. The fact that thousands of people contacted them signals they have a real problem on their hands. They know you are willing to donate to our efforts to hold them accountable!

Please do me a favor. A box of lit costs $150. Please help us pay for more literature so we can hand them to thousands of their voters. Deliver a new box of lit to our team with a donation of $150. If that's too much, help us buy a partial box with a donation of $100 or $50. Let's continue forcing this issue by taking the message DIRECTLY TO THEIR VOTERS!