Did You See What We Did This Weekend? 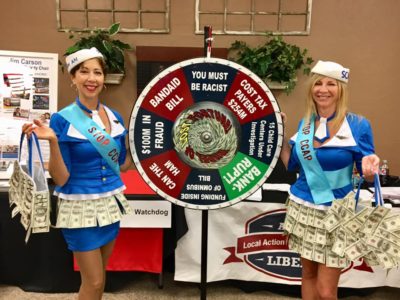 Got $100 Million in cash from ripping off the taxpayers in the Child Care Assistance Program? Want to send it to Somalia? Then come aboard Scam Am Airlines and we'll ensure your cash gets to East Africa and safely in the hands of terrorists.

That was our message at the MNGOP State Convention this past weekend. Our team was on the ground getting signatures for our petitions and going up to politicians to get them to pledge to end the fraudulent CCAP program.

Here's the good news. Four legislators signed the pledge to include two of the candidates we helped get elected: Jeremy Munson (23B) and Shane Mekeland (15B).

Sen Gazelka already refused to sign the pledge earlier in the week, so we had a couple of our teams do a lit drop in Nisswa, the Gull Lake area and Little Falls this weekend.

Senate Republicans are punting on this issue until after the next election. They don't want to take the hard, and correct stance, to end the fraudulent program. $100 Million of money is being fraudulently taken from taxpayers and shipped overseas.

We need to spread the message far and wide. Every Republican Senator needs to hear from us about ending the program and you can help make that possible.

Tell the voters in Paul Gazelka and your Senate District what these politicians are up to. Donate now:

We must spread the message immediately. There's only 3 weeks left of the legislative session remaining. After May 20th, if Republicans don't act, more of our money will be ripped off and sent overseas.