Jake Duesenberg here, the President of Action 4 Liberty. Elections are interesting because they have obvious tangibles (money raised, organizational structure, polling trends) and intangibles (energy of the base, swing voter attitudes). No one really knows how an election will go until all the votes are cast. But our team is on the ground in Minnesota and monitors the data nationally, so we believe we're in a good position to make some logical predictions.

In fact, we accurately predicted the Trump victory in 2016 a week before the election and the victory of Democrats in 2018 a day before votes were cast. So we're not just a bunch of cheerleaders, blindly cheering for Team Red. Perhaps these predictions have gone straight to my head and I'm about to eat crow. I contend, however, we might be seeing something that the mainstream media and pundits are missing...or purposely ignoring.

Trump is surging late. Of all the elections I've witnessed, this one makes the most sense why people are breaking late in the game. The defining issue of this election has jumped around quite a bit. One would've believed law & order would define the November election coming out of the chaos of this past summer. But COVID raced back to the front. Democrats are running on health care and the threat to ObamaCare, while Republicans are continuing the talking points of backing the badge. Both play well to voters, but COVID remains "the issue" for us all. Despite what the media might think, the people in this country aren't in sync with endless shutdown powers, which is the view held by nearly all Democrat executives in the country.

When it comes to voter energy, I've found energy for a candidate beats energy against a candidate any day of the week. Look at 2012 (Obama vs Romney). I remember thinking the anti-Obama faction would come out in droves to support the lackluster Romney campaign. They didn't. And he at least had a hundred people at rallies and could finish a full sentence. Here's the other thing. Biden does not have the travel schedule to win nor does his team have the grassroots field operations to pull off a victory. Doorknocking is effective and Democrats are too afraid of COVID to compete.

Trump will win the hispanic vote in key areas, to the shock of the media. He'll do better with the black vote than other GOPers in the past. His biggest math problem is white women (which he'll still win, but not as much as last time).

This picture is the Real Clear Politics map of current polling. Landslide victory for Biden. Polls will be slightly more accurate this time around because voters won't go third party as much as they did in 2016 (they didn't ask that question in a lot of the polls). More of the Trump base will show up than the Biden base which throws off the data. 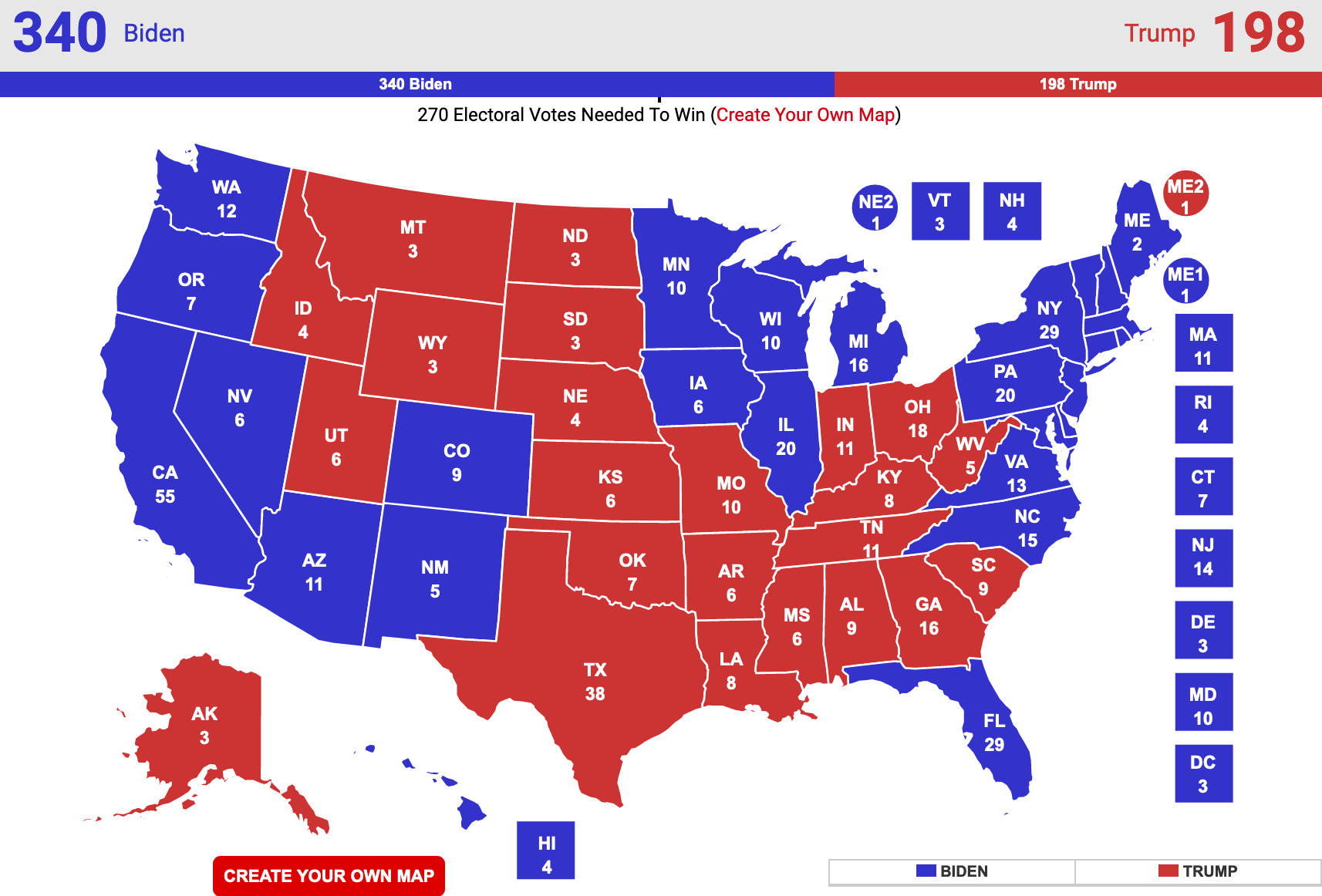 Also, there's an actual investment in voting this year. Voting early requires the casual, lazy voter to do some work. Otherwise he or she has to go in person on election day and risk catching COVID. Take a guess which side that helps.

Trump will win his second term and the media will once again wonder how it happened. I certainly hope the pundits claiming half the country is racist will actually talk with their neighbors for once and understand the various reasons Trump receives support.

Republicans will win back 4-6 seats in the State House, giving Democrats only a slim majority. We're seeing voters break late for Republicans. There will be seats picked up in the outer suburbs, plus rural seats that will switch from blue to red. This is very important to us since we were four votes short of Ending Walz' Emergency Powers in the House. For those who aren't aware, the big money in Minnesota went to the battle for the state senate. House Republicans trail the DFL House by a large factor.

The Minnesota Senate is really a toss up. If you look at the math (insiders on both sides are), the Democrats have an advantage over the Republicans. In other words, there are more vulnerable Republican incumbents than there are Democrats. Gun to my head, I say Republicans will have a one seat majority. If they do better, that's because the Trump energy carried down ballot and helped these suburban Republicans who are in serious trouble.

Balance of power stays the same in the end, but the majorities weaken. That's important for our battles!

There is a path for Jason Lewis to win statewide without Trump winning Minnesota. Although I'd argue both might happen. Tina Smith's poll numbers spell trouble for an incumbent Senator. Republicans haven't won statewide since 2006 and Klobuchar had no trouble in her recent re-election. But Lewis ran a good campaign, built name ID gradually throughout the year, attached himself to the Trump train and will oust the former Planned Parenthood Exec in the end. I don't follow the state-by-state race for the U.S. Senate closely, but I imagine a Minnesota victory will help McConnell's strategy immensely.

How are people ignoring the massive numbers showing up for Trump rallies compared to Biden's pathetic COVID-compliant coffee chats? Imagine the energy that goes in and out of a Trump rally and what that does for the state. What's achieved by Biden coming in and talking to 30 people? Both get the media hit, but Trump gets the multiplying affect of voter energy. 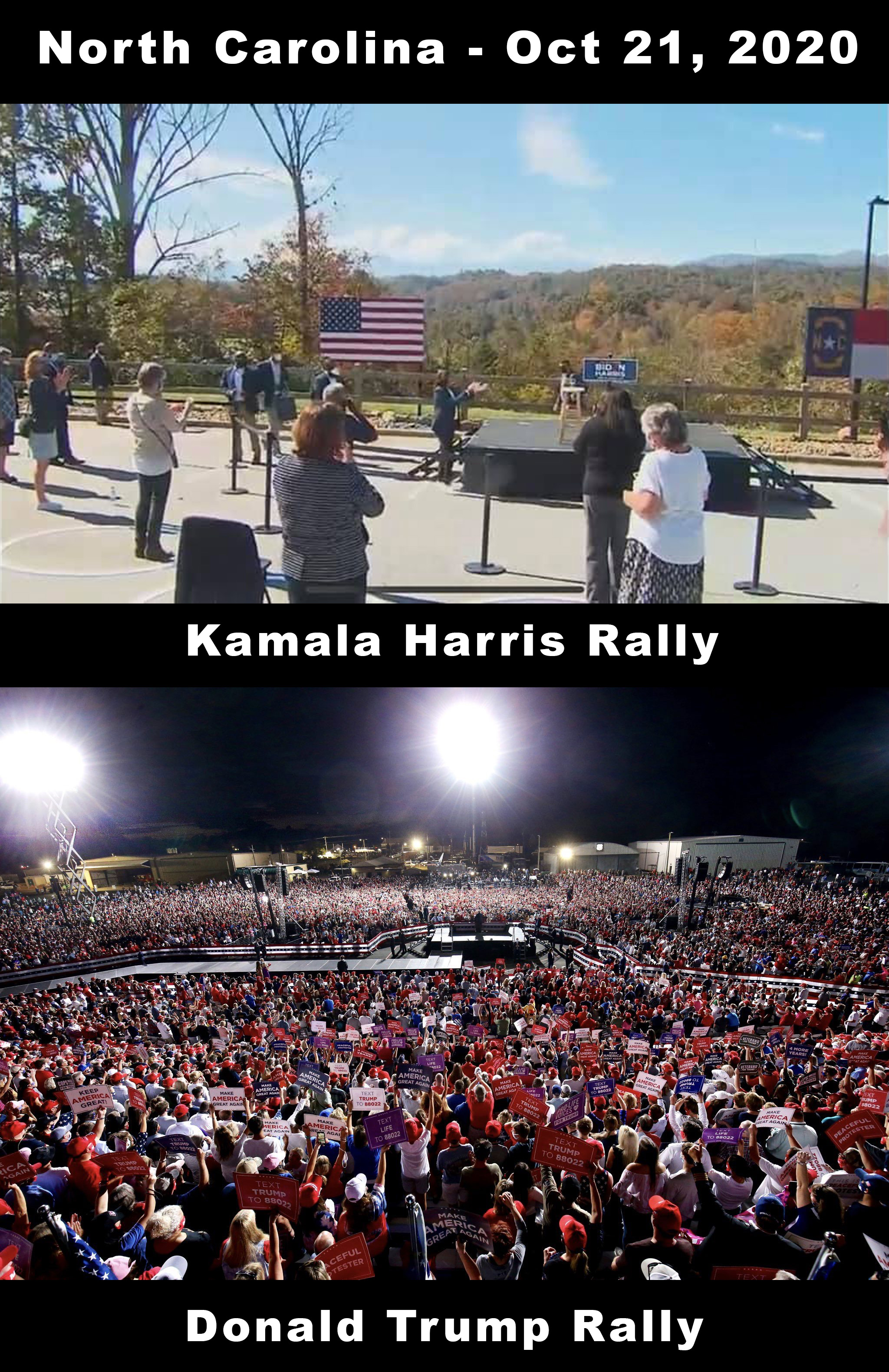