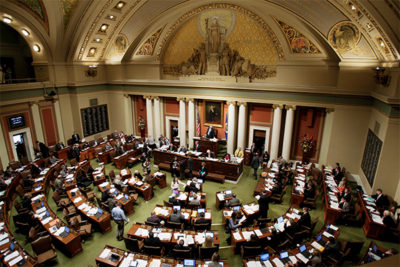 Legislators passed a bill in the Minnesota House late Monday night that would make it illegal to use a cell phone while operating a vehicle unless using a hands-free device. The bill (HF 50) aims to solve the problem of distracted driving according to its authors. But main opposition to the hands-free bill assert that distracted driving is already illegal and that the bill would not solve the underlying problem.

The bill states when a motor vehicle is in motion or part of traffic, the person operating the vehicle is prohibited from using a wireless communications device, which "includes but is not limited to: 1) initiating, composing, send, retrieving or reading and electric message and 2) engaging in a cellular phone call, including initiating a call, talking or listening, and participating in video calling." Exception: if a wireless communications device is used "solely in a voice-activated or hands-free mode." Violators of the hands-free law would face a $225 fine for their second infraction.

Exempt from the bill are law enforcement officers and emergency vehicles. An amendment offered by Rep Steve Drazkowski (R-Mazeppa) would have removed this exemption, but was defeated decisively on the House floor.

Action 4 Liberty opposes this bill because it limits individual freedom and increases government control. It's not clear how the tens of thousands of Minnesotans who rely on mobile devices for commerce everyday will be able to continue activities such as ride-share services. The bill also seems to unequally harm lower income folks who do not drive vehicles with hands-free features.