Here's Why Nothing Gets Done in Minnesota

Ever wonder why nothing gets done in Minnesota for the conservative agenda? Even when Republicans control a body of the legislature, good conservative reform bills barely see the day of light.

We came across a post today from Sen Paul Utke that described why, despite receiving a plethora of calls from constituents to end Walz' Emergency Powers, Senate Republicans aren't poised to make a motion to strip Walz' power. Cowardly hiding behind the notion that Democrats control the other chamber, Utke and his colleagues have thrown up the white flag. Of course, on the other side of the aisle, Democrats never hesitate to push things like gun control even when they know it will be defeated in the Senate. 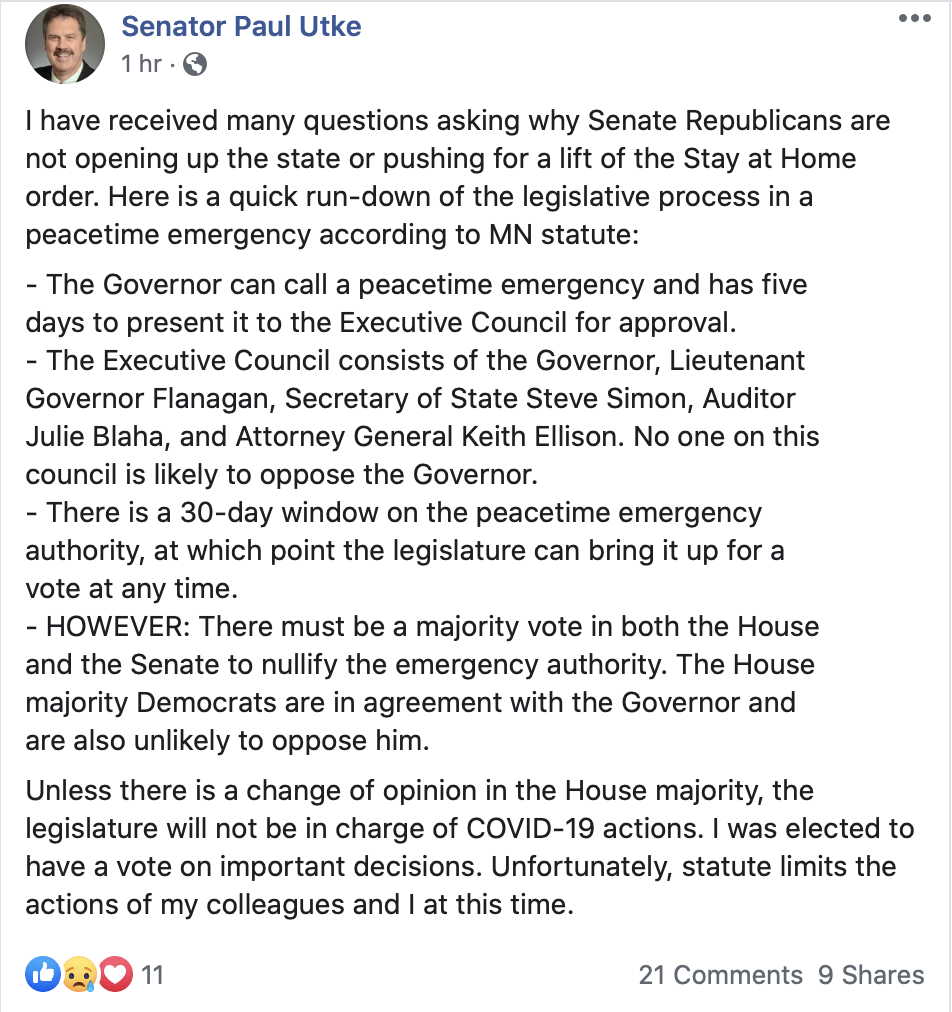 How sure is he and Senate Majority Leader Paul Gazelka that groups like ours can't organize a big effort in the districts of 10 DFL House members to get them to vote in favor of it? After all, that's the purpose of our organization. But Action 4 Liberty too often finds itself fighting on the Republican side just to get some momentum on an issue. The Republican Establishment is no better than the Democrats. Even though their motivations come from a different place.

Take the Minority leader of the Republicans in the Minnesota House. He works for a Washington D.C. lobbying firm. You heard that right! Doesn't get any swampier than that. Kurt Daudt is a lobbyist legislator, something that most believe should be illegal. When Rep Munson and Drazkowski made a motion last week to strip Walz' of his power, the biggest fight they had was from Daudt and his loyalists (which appears to be shrinking in numbers these days - thank God!).

What's Gazelka and Senate Republicans' motivations? It doesn't appear as obvious as Daudt's. Perhaps its what popular Minnesota conservative blogger John Gilmore often states: "they're the dumbest Republicans in the nation".

If I was speculating, I'd say they're too worried about disrupting the status quo and hurting relationships with the Swamp. Gazelka and team care more about playing things cool for November's election prospects, than saving our small businesses. Although, we know their getting an ear full from that community right now.

This issue is far too important to sit idly by and let comments like Utke's go unchecked. Unemployment is rising rapidly in this state and our legislature is no longer acting as a co-equal branch of government with the Governor. Unilateral law-making by one person is something everyone on the Republican side should rally against. It's time we end Walz' powers NOW!