How Fairness is Lost on Socialists Bernie and Omar 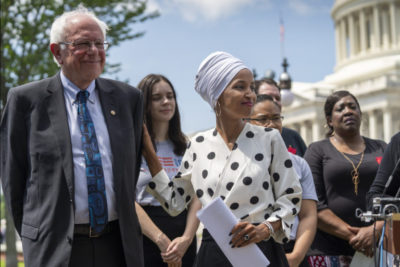 From the king of the “fair share” community, came one of the most atrocious ideas in modern politics. Bernie Sanders and Ilhan Omar led a coalition of socialist legislators to push for eliminating student loan debt yesterday. Their plan would institute a “tax on Wall Street” to pay for the program that aims to retire college debt and publicly fund future college students.

There’s an initial attraction to the idea of paying down the massive $1.6 Trillion of student debt that has accumulated over the last couple decades. Young workers are entering the workforce with mountains of debt that makes a big impact on their personal budgets. It’s understandable why people with college debt would gravitate towards such a plan.

But if one peels back the layers of this rotten onion of a plan, it’s quite evident that fairness is not at the core of Bernie and Omar's belief systems. The plan is paid for by a tax on stock and bond transactions. People have this idea that only the wealthiest Americans would be affected by such a tax, but the vast majority of securities are actually owned by regular folks. We all invest using popular investment vehicles like 401ks, IRAs and insurance products like annuities.

How many of the small investors hit by Bernie and Omar’s new tax worked hard and paid off their student loan debt previously? They get hit twice as hard. Not only did they get no relief for their debt, but now they are the providers of the relief to the new generations of indebted college grads.

In the press conference, Bernie mentioned how the debt has accumulated to these college kids at “no fault” to themselves. But how does that resonate with the millions of blue-collar workers out earning a living for themselves who didn’t waste 5 years and tens of thousands of dollars chasing a college degree?

Bernie and Omar seem to think the solution to out-of-control education costs is to double down on government's involvement in that sector of our economy. But that is the precise cause of the mess we're in. Similar to the housing market bubble, government has steadily increased its role in the marketplace by financing college education grants, backing student loans, and encouraging more kids to attend universities. This government distortion of the marketplace has led to rising costs due to lack of price controls and has sent more kids to college who would have been better off entering the workforce earlier.

The Bernie/Omar plan is an awful idea and leads this country more towards the failed socialist states that our country must avoid. We here at Action 4 Liberty will fight tooth and nail to stop socialist ideas from being implemented in this country and Minnesota.