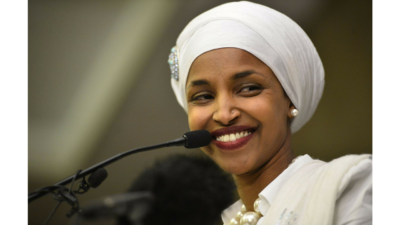 Minnesota's greatest political embarrassment is back in the news again. This time because the Campaign Finance Board found Ilhan Omar in violation of campaign finance laws. Omar used campaign funds illegally for personal travel and to use a divorce attorney. The CFB ordered her to deposit $3,469.23 into her state account and fined her $500. A mere slap on the wrist.

But the bigger news may have come from a tiny piece of information obtained in the CFB's investigation. According to her tax returns in 2014 & 2015, she filed a joint tax return with her current husband Ahmed Hirsi. At the time, she was legally married to a gentlemen by the name Ahmed Nur Said Elmi until petitioning for divorce in 2017. That means she would have filed fraudulent tax returns.

This is where it gets interesting. There's a lot of evidence that suggests Ahmed Nur Said Elmi is actually her brother and the marriage was done to allow him to obtain U.S. citizenship. Alpha News did the extensive researchon her questionable marriage last year, which was dismissed by the mainstream media in Minnesota. Apparently they aren't interested in potential immigration fraud of someone running for U.S. Congress. It's also against the law to marry a biological sibling.

Ilhan Omar has a sketchy past of skirting the laws and it is unfortunate that she is now in a powerful position in our country's capitol. Action 4 Liberty will keep you informed about developments in this story.