Legislator Turned Lobbyist - It's All a Big Laugh to Them

A lucrative deal for legislators who want to cash out on their time in the St Paul Swamp is to explore the grey areas of legal lobbying on the Minnesota books. MPR recently published an article about these troublesome areas and how the Minnesota Campaign Finance Board's proposed changes to current law face an uphill battle.

Kurt Daudt, House Minority Leader of the Old House Republican Caucus, made headlines in November when he announced that he was taking a new position with an infamous DC lobbying firm as the Director of Public Affairs. In the firm's press release, they stated that Daudt was hired because he enables the firm "access to elected and appointed leaders in all 50 states” and Daudt has a “deep knowledge of the legislative process.”

What's most troubling about Daudt's move is that he will remain an elected legislator while also serving in his new lobbying capacity. How that is not a conflict of interest in the minds' of most of his Republican colleagues in St Paul is troubling to small government advocates like us.

Perhaps the silence from members in his caucus is due in part to a swampy tradition that precedes Daudt and continues on to this day. Keep in mind that former Majority Leader Joyce Peppin did not seek re-election in 2018 because she was also taking on a new role in public affairs.

Shortly after Daudt's announcement, Nick Zerwas (R-Big Lake/Elk River) announced his resignation from office which forced a special election to fill his vacant seat this February. During the Christmas break, Zerwas snuck a tweet in declaring that he also would be going to work in the public affairs realm for a lobbying firm.

Rep Jim Nash, a fellow member of the Old House Republican Caucus, quickly took to twitter to joke about Zerwas' new lobbying gig. Nash tweeted, "so do I keep candy in my desk drawer in the SOB for meetings with you now?"; making fun of the newest legislator-turned-lobbyist scam at the Capitol. 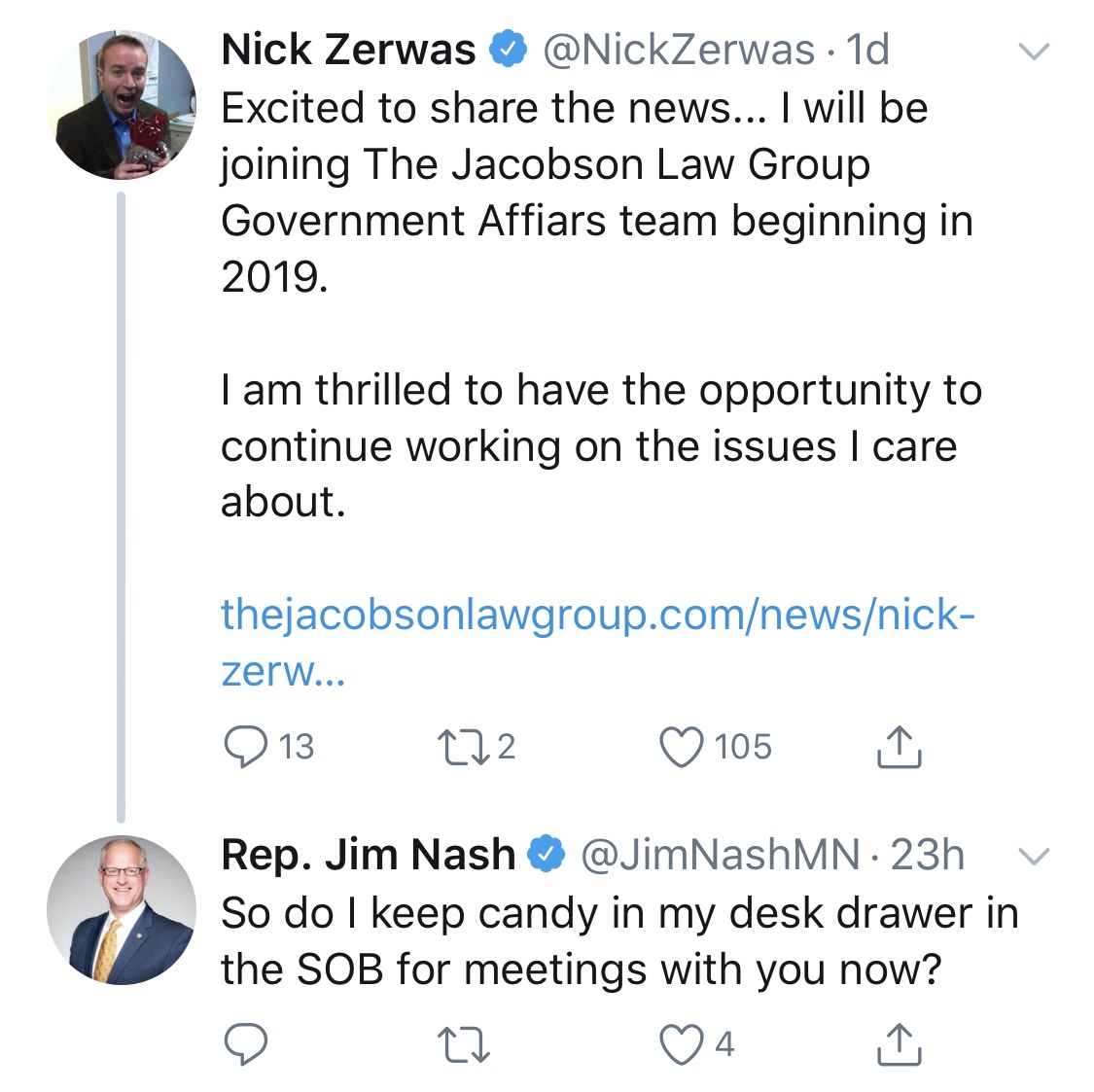 Action 4 Liberty advocates for reducing government control, while expanding individual freedoms. Is it any mystery why we continue to see government grow even while Republicans are in positions of power? Most of these legislators, Republicans and Democrats alike, have no interest in limiting government. Instead, they are just part of the swamp that continues to grow its power and erode our freedoms. Meanwhile, it's all one big joke to them.