Legislature Passes Massive Spending Bill in the Middle of the Night 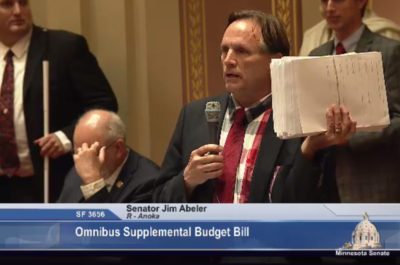 Late last night, the Omnibus Supplemental Spending bill(SF3656) emerged from its conference committee and was taken up on the Senate floor. Senators had roughly one hour to read the 990 page bill before the floor debate began. Then, at about 12:15 am, the Senate voted and passed the massive bill that contains multiple subjects and grows government.

The House then began their debate on the bill at about 1:00 am, which lasted until around 3:00 in the morning. Democrats in both chambers argued the unconstitutionality of the multiple subjects (Article 1, Section 17) and pointed to the fact that Governor Dayton will veto the bill. Most Democrats voted against the bill due to the Bernie effect - vote against bills that don't spend enough money.

Seven total Republicans broke party lines to spend against the large spending bill. In the Senate, both Sen Fischbach and Sen Pratt voted no. In the House, Reps Bahr, Drazkowski, Hertaus, Lucero and Munson all opposed the bill.

Action 4 Liberty was against this bill for an onslaught of reasons. First and foremost, after Governor Dayton vetoed the tax conformity bill, we called on the Legislature to not send a single spending bill to the Governor's desk until he signs a new tax bill. Government is operating under a two-year budget that fully funds the agencies, so new spending is not needed.

We also feel its incumbent upon legislators to follow the Constitution which clearly states that a bill must be single subject, and that subject expressly written in the title. Lastly, it's not wise to support legislation that no one reads and is voted on in the middle of the night.

SEE HOW YOUR REP VOTED