Senate Republican Majority Leader Paul Gazelka and House Minority Leader Kurt Daudt are attacking pro-Trump group MAGASOTA, calling them scammers on a website created yesterday. The website alleges that MAGASOTA is "diverting valuable volunteer time" and stating that the group is not affiliated with the official Trump re-election organization.

FEC filings show that MAGASOTA is registered as a Super PAC, which means there is a legal requirement to be independent from the official campaign. According to MAGASOTA, the purpose of the group is to win Minnesota for Trump by identifying and activating independent voters and disenfranchised conservative voters. Their assumption is that the Republican Party of Minnesota, who has failed to win a statewide election since 2006, will not be equipped to do what it takes to get new voters.

MAGASOTA also focuses only on Trump's re-election. Whereas, the Republican Party effort will piggyback off the Trump campaign to get all Republicans on the ticket, conservative and RINOs, elected in November. MAGASOTA thinks that strategy will turn off independent voters.

Perhaps that's the reason Gazelka is attacking MAGASOTA. The Senate Republicans have a big fight ahead to keep their majority. Is Gazelka jealous that MAGASOTA is successful at organizing? Most of their meet-ups are packed with new people and they are making calls every day around the state identifying potential Trump voters. Meanwhile, Senate Republicans continue speaking to empty rooms at their town hall events and have a lackluster social media game.

Or is there something more sinister at play? Is this the reemergence of the Never-Trump community? Kurt Daudt made headlines in October 2016 when he called for Trump to end his campaign a month before the election. Had Daudt been successful, Hillary Clinton would be president. MAGASOTA aims to activate Trump people to become part of the Republican caucuses on Tuesday. Never-Trumpers view this as a threat to their power.

Strangely the website also calls a pro-Trump Facebook group a scam. Facebook groups are nothing more than a forum for like-minded activists to share information. There are dozens of pro-Trump groups in Minnesota and all of them are free to join. 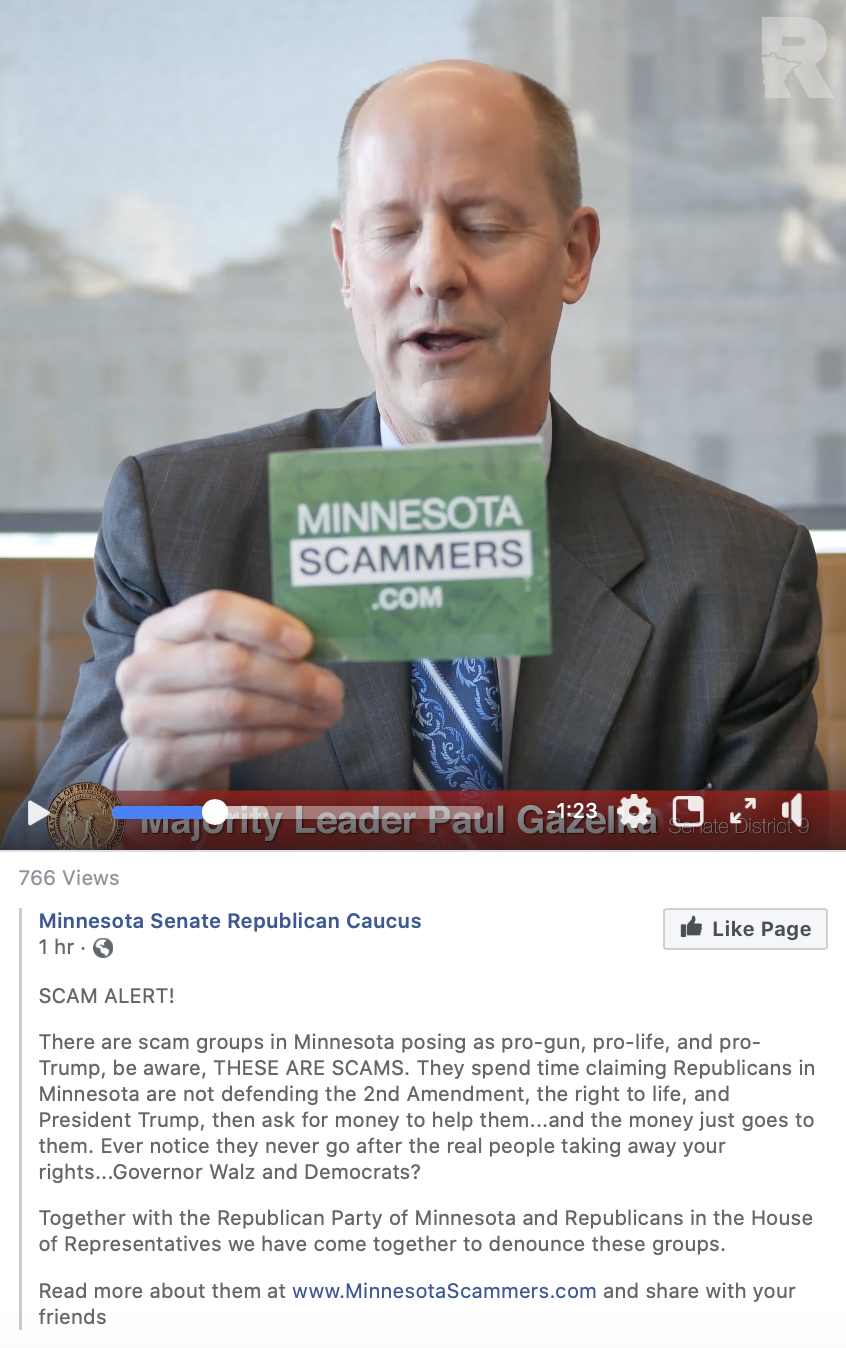 The Republican Party of Minnesota sent out a statewide email joining Gazelka and Daudt in calling them scammers. Chairwoman Jennifer Carnahan writes that MAGASOTA preys "on low information activists that love our President - and manipulate[s] those activists to get involved in efforts that cause harm to our President's ability to win Minnesota." She goes onto say "any outside group or entity that tries to use our activists and leaders to work against our President and fellow Republicans will not be accepted by our party."

Action 4 Liberty condemns the Republican Party and Republican Senate & House Caucuses for this action. For a group who hasn't won a statewide election in over 14 years, they're not in a position to stop outside groups from organizing to help Trump get re-elected.