We just passed the One Year mark of Governor Walz' Unilateral Declaration of Emergency Powers. Since March 13th of last year, Walz has abused his powers and destroyed businesses, infringed on civil liberties and has interfered in our lives at unprecedented levels. For those reasons, our team has one thing to say to him:

Today, Rep Erik Mortensen introduced the Unilateral Emergency Powers Repeal Act on the House floor. And Rep Jeremy Munson has already signed on as a co-author! Unlike all the fake bills offered by weak Republicans and Con Artist Democrats like Julie Sandstede, this legislation does exactly what is needed to RESTORE OUR REPUBLIC!

Here's what the Unilateral Emergency Powers Repeal Act does:

1. Removes the Governor's Ability to Unilaterally Declare an Emergency

The most concerning thing to us in the last year is that one man was able to unilaterally declare an emergency, create his own orders, extend those powers, and the only way to make them end is to get members of his own party to vote to remove them. This is the most anti-democratic thing I've ever seen. At it's also illegal, according to our Constitution.

So our legislation removes the ability of the Governor to unilaterally declare Emergency Powers, instead requiring a 2/3 majority in both the House and Senate to declare one. We think the large majority is so important because we want to ensure that the emergency goes well beyond politics, and is widely accepted by the legislature as a serious issue.

2. The Governors orders will not be treated as law

The purpose of executive orders is for a Governor to direct government agencies and workers, not to order citizens to do or not do something. Unfortunately, Walz has treated executive orders as a power similar to that of a king. He's used them to force us to wear masks, stay in our homes, shut down places of worship, close businesses and a long list of other violations of our civil rights.

Courts have upheld Walz' ability to do this by how poorly written the Chapter 12 Emergency Powers law is written. So the Unilateral Emergency Powers Repeal Act eliminates the portion that treats the Governor's order as law! Which means, you don't have to follow Walz' orders and the courts can't make you!

3. Punishes the Governor with Jail Time for Violations

Chapter 12 law right now states that violators can be punished by $1,000 fine or 90 days in jail. So Governor Walz took that part of the law and applied it to violators of his orders. In other words, if you went over to your friend's home last November against his order, you could've been put in jail for 90 days.

This bill reverses the punishment. Now if the Governor or a government agent violates the law, then they will be punished by a $1,000 fine or 90 days in jail; not YOU. This would put Walz behind bars if he did this again!

4. Establishes a Citizens' Bill of Rights for Emergencies

Last, but certainly not least, the Unilateral Emergency Powers Repeal Act not only takes away the ability of the Governor to unilaterally declare an emergency, issue orders with the weight of law, and punish people with jail time, it also ensures that people's rights are protected by a Bill of Rights.

Here's what the Citizens' Bill of Rights states:

Nothing in this chapter authorizes the governor or the state director to:​

(1) infringe on the rights of the people in the state, including but not limited to:​

(i) the right of free speech;​

(iii) the right to assemble;​

(iv) the right to keep and bear arms;​

(v) the freedom of travel; and​

(vi) the right to operate a business or earn income; or​

(2) make orders that carry the full force and effect of law, which is a power only granted​ to the legislative department under article IV of the Minnesota Constitution.​

Want to See This Pass? Here's How to Help

I think it goes without saying, that Governor Walz is not likely to sign the Unilateral Emergency Powers Repeal Act. After all, what tyrant would give up his own powers? So the objective of this legislation is to build such a massive block of support in the Legislature to override the Governor's veto OR to settle the score in the 2022 election.

Can you imagine a more important issue to present to the voters than this?! We are prepared and ready to run the NEVER AGAIN campaign if it comes to it.

But I'd like to think optimistically. We've now hired a whole team of doorknockers and field operators and have the flexibility to move them to targeted districts across the state to put pressure on more legislators. So we're going to start taking this message to voters immediately!

Here's the lit we just delivered to our team for the week. Thank you for supporting our field operations. 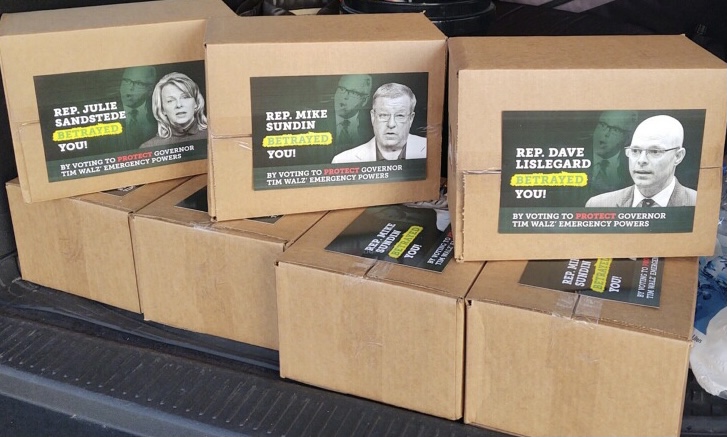 We need your help. Please contact your Republican state representative and tell him or her to sign onto HF 2204, the Unilateral Emergency Powers Repeal Act, as a co-author. We MUST ENSURE that we have at least 15 authors on this bill so we can get a roll call vote on it when we bring it up for a vote.

You are likely to be met with resistance, as shocking as that might sound. Our intel at the Capitol is that House Minority Leader Kurt Daudt has instructed members to not sign on to bills that Rep Erik Mortensen authors. I know what you're thinking - how petty can this guy be?

But remember, Daudt isn't their boss. You are, as the constituent. Most of these Republican representatives are in agreement with us on this important issue. Don't let them follow Daudt's orders. Tell them to stand up for principles and sign onto HF 2204, the Unilateral Emergency Powers Repeal Act, today! We have to make sure this NEVER HAPPENS AGAIN!