A new radical leftwing group just emerged in Minnesota and is already launching a massive advertising campaign promoting their hero, Tim Walz. In fact, their first ad promoting Walz talks about how he made "Historic Investments in Minnesota's Small Businesses". What a slap in the face to the thousands of businesses this man destroyed with his Unilateral Emergency Powers! 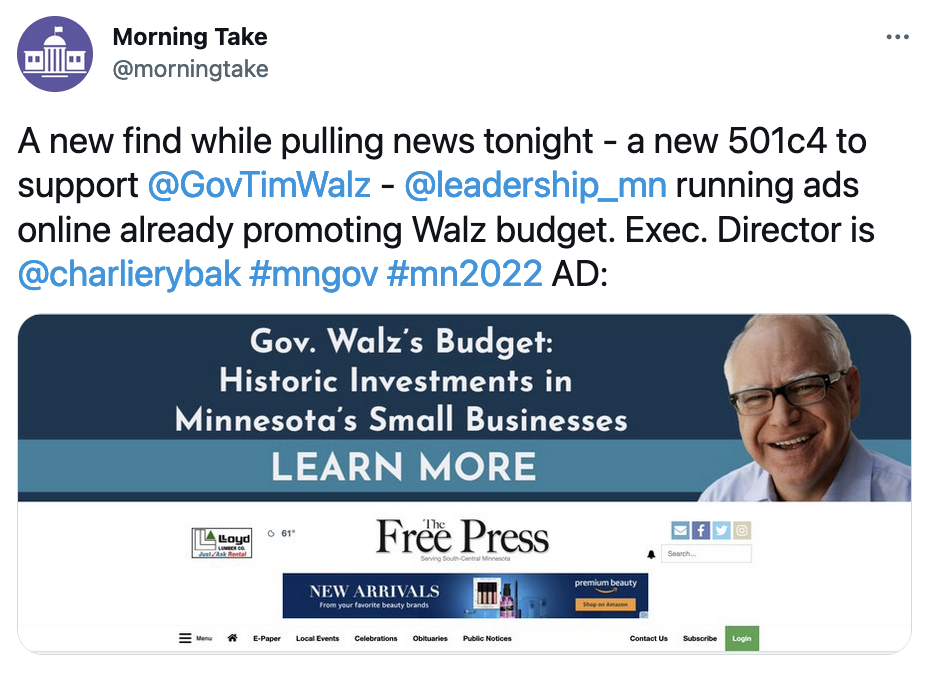 Unfortunately, this new far-left group has some huge financial backing. It's being run by former Minneapolis Mayor RT Ryback's son. And this signals the beginning of Tim Walz' run for re-election.

Can you imagine a guy who locked his citizens in their homes, shut down businesses, forced kids to wear masks and incentivized teenagers into getting an experimental drug, could be re-elected?

Well that might just happen when the big money lines up behind the leader of Minnesota's COVID Cult.

Since weakling Paul Gazelka sold out and passed Walz' budget without passing Rep Erik Mortensen's Never Again Bill, Walz is in position to declare Unilateral Emergency Powers all over again.

This is incredibly troubling since the media is selling the fear of the COVID Delta variant and Biden talked about a government program going door to door to vaccinate the population.

Action 4 Liberty was created to fight against this excessive government control and power. We go to war on your behalf to advance and protect liberty from tyrannical politicians.

But the evil of the modern liberal movement is getting funded and we're starting to see their lies being advertised directly to Minnesota voters.

THIS MUST BE STOPPED!

Action 4 Liberty invests our time and resources in young liberty professionals who are the boots on the ground across the state holding these politicians accountable. Our team works around the clock to STOP the Tim Walz train from running over all our liberties.

We need boots on the ground to build the political energy needed to pass important legislation like the Never Again bill. And we need these young fighters making calls, knocking doors and showing up around the state if we want to Stop the Walz Agenda.

But we can't do it without your financial support. YOU are the reason we are able to bring the fight to them! Will you do me a favor and make a donation today!