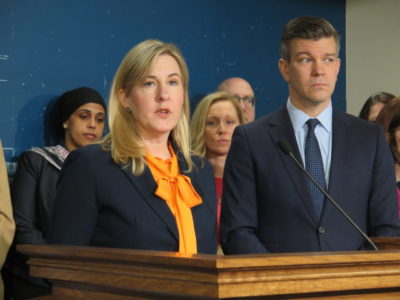 Last night the Democrats advanced their radical agenda in the Minnesota House despite Republican opposition. First, they passed a 20 cents gasoline tax which would increase the current tax by a whopping 70 percent. This would cost the average family between $200-300 more in taxes each year.

Democrats argue that a gas tax is needed to fund the current transporting spending gaps, but the Minnesota legislature is facing a massive $4 Billion budget surplus. They also have wasted over $100 Million on the broken MLARs system and there is rampant fraud in the state child care assistance program. Democrats have plenty of money to use for transportation if they would prioritize spending in the right areas.

The tax was tucked inside the Transportation Omnibus bill (HF 1555). Here's the vote:

Late in the evening, the Democrats passed two gun control measures inside of the Public Safety Omnibus bill (SF 802) that restrict our individual freedoms. The Red Flag confiscation provision allows law enforcement to take firearms away from people without due process if someone assesses them as a risk. Universal background checks requires all transfers and/or sales outside of immediate family members to go through a federal firearms licensed background check.

If the background check bill were to pass the Minnesota Senate, it would be illegal for you to loan your brother-in-law or friend a shotgun for a weekend hunting trip.

Here's the final vote on the Omnibus bill. It passed with 70-64 with five Democrats joining Republican opposition:

Action 4 Liberty opposes increasing taxes and expanding gun control measures on law abiding citizens. We believe that the Republican Senate must work diligently to advance the conservative agenda at the Capitol and not only play defense against the radical liberal agenda. That is the only way to start winning in policy arena.