The ReOpen Tour with Rep-Elect Mortensen

We went on the road Wednesday and Thursday from Lakeville to East Grand Forks, to support the many restaurants/bars who opened up in defiance of Governor Walz. 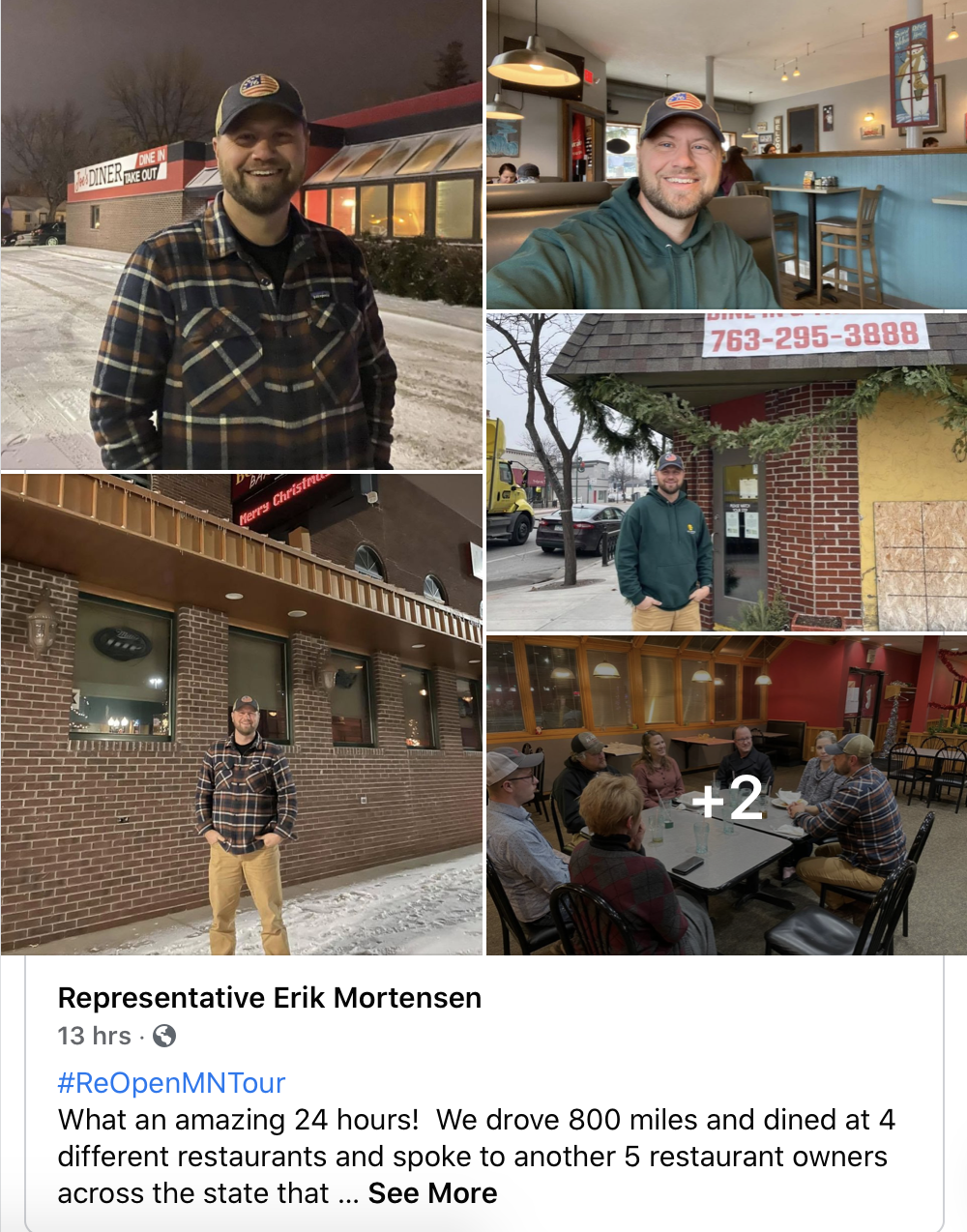 Here's what we learned from the tour:

1. Owners were extremely concerned about the financial livelihood of their employees.
2. The Attorney General and Governor Tim Walz are scrambling to exert their unconstitutional authority. Clearly they’re worried about "We The People" overpowering them.
3. Governor Walz has lost the consent of the governed in massive numbers.
4. Every owner sees this fight as critically important for the preservation of our constitutional Republic.
5. Owners, employees and guests were all willing to risk jail time for what they believe in.
6. Guests rewarded these brave small business owners and tipped VERY generously.
-

Our hero from Lynd, MN got a little emotional yesterday on Facebook live when she broke the news that a judge ruled in favor of Keith Ellison instead of her freedoms. These robed gangsters are supposed to believe in the rule of law, but they have manipulated the legal system to allow one person to unilaterally infringe on our liberties.

But Larvita still won't back down! She won't let anyone stop her from pursuing her American dream. Where's that kind of courage at the Minnesota Capitol?

Jane Moss Has a Hearing Today

Jane, who owns the Boardwalk Bar & Grill in East Grand Forks, will be in court today against Keith Ellison. She has pretty good legal representation and the case is being heard outside of Ramsey County, which puts a couple more things in her favor.

Please help Jane by contributing to her legal defense fund.

Jane also inspired another business owner in town to open up on Wednesday. His name is Joe and he's 19 years old and already owns two restaurants. Governor Walz is literally crushing a young man's dreams and he could not stand back and take it anymore.

We helped take out four of Walz' rubber stamp cronies in the November election. So in January, when the new legislature swears in, the math is on our side to finally pass the End Walz' Emergency Powers Resolution once and for all.

Our team is already working on our pressure campaign to make sure we get the votes in January. It's time that Governor Walz' powers get stripped and our freedoms are restored. Help equip our team with the resources we need to win in January!