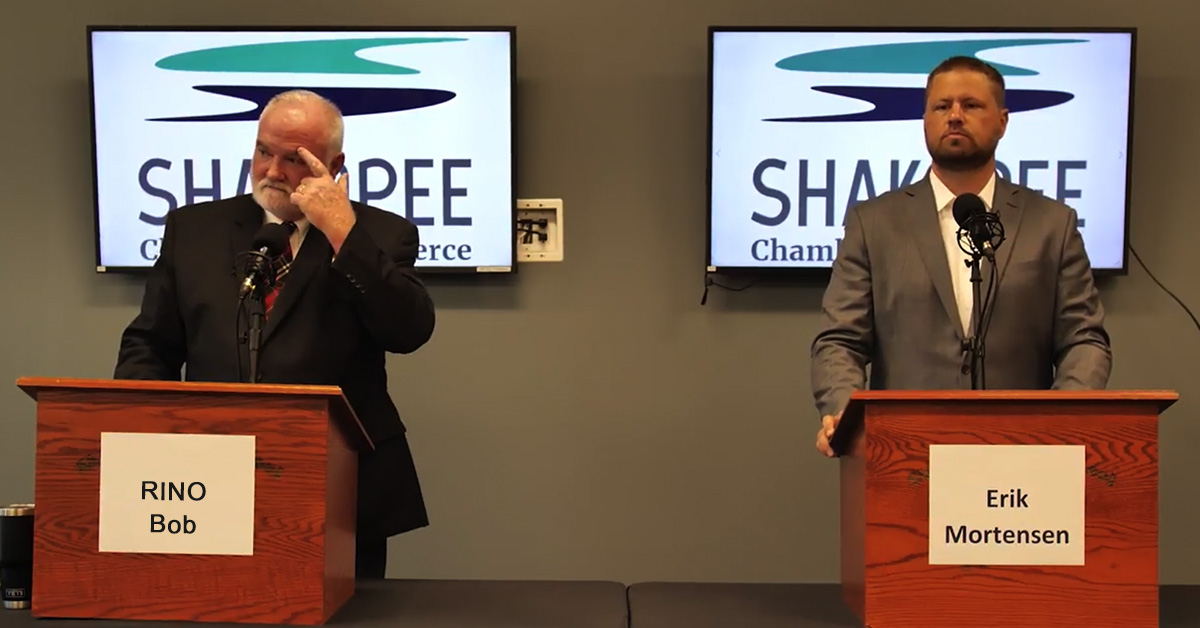 Representative Erik Mortensen and Bob Loonan met at a debate for House District 54A sponsored by the Shakopee Chamber and Visitors Bureau on July 12th and it was uploaded online last night. If you are yet to witness the verbal beatdown Loonan took from Mortensen, you can check it out here.

This debate was the epitome of the divide within the Republican party as it featured two figures who embody extremely different wings of the GOP. On one side is Rep Erik Mortensen, a young, firebrand from the pro-liberty side of the GOP. On the other side is recycled politician and liberal voting Republican, Bob Loonan.

Mortensen began the debate by emphasizing the debate with Loonan two years ago where he made promises to his constituents to never grow government, raise taxes, support unconstitutional omnibus bills, and refusing to spend any of our overtaxed surplus dollars. Mortensen then said he has been doing everything he said he would, on the other hand, Bob Loonan has supported big government, raising taxes, voting for thousand page unconstitutional omnibus bills, funding Planned Parenthood, and spending surplus money.

Loonan came out swinging at Mortensen, hoping for a golden moment that never happened. The Republican Establishment is willing to do anything to take out Mortensen, unfortunately for them, they’re up against grassroots conservatives fed up with political BS. Loonan’s campaign is in shambles as he was caught lying on his campaign material, claiming to be the endorsed GOP candidate. The reality is that Loonan has not won an endorsement or election in 6 years. This is partially due to the drunk driving DWI he got in 2018.

However, Mortensen kept the debate focused on policy, while Loonan tried phony lines of attack. Here’s how some of the debate went down on certain topics:

Loonan's basic premise is that Mortensen doesn't work with the politicians at the Capitol. He said Mortensen hasn’t passed a single bill.  Mortensen immediately addressed the objective falsehood, listing off multiple bills he’s passed and explaining he has passed more bills than 90% of the freshman Republicans in the House. Mortensen talks about the projects he has helped with like getting a handicap ramp built and standing up for nurses who were being fired with vaccine mandates.

Loonan also tried to argue that the government grew more under Mortensen than himself, to which Mortensen replied “Bob saying the government grew under my watch, that’s so funny. Do you think the people are that stupid Bob? I mean I voted against these things.” Loonan then said “Look it up” and Mortensen replied “I don’t have to, I voted against these things, this growth in government, Bob voted for 10% increases in budget, so to say that I’m somehow to blame is absurd because I voted against every single growth in government, Bob voted for 10% increases when he was in office.”

Bob's score on the Action 4 Liberty Scorecard, when he was in office in 2018, was an abysmal 36%. His failing score was mostly attributed to his votes on growing government. Mortensen is a 100% on the Scorecard.

Loonan came out against Constitutional Carry in the Republican debate! He started by saying “not everyone should have a gun.” and continued “I don’t support the Constitutional Carry bill the way it is written right now. Not any person should be able to buy any gun and carry it anywhere. There are people that shouldn’t have guns.” Mortensen replied “Maybe Bob should go out and buy a gun so he knows the process. Constitutional carry law does not change who can buy a gun, and I guess Bob needs a schooling on this, he’s anti Constitutional Carry but he doesn’t understand the law as it's present in 27 states now."

Constitutional Carry is a big issue for gun owners. Seeing Bob come out against it was quite a revelation.

When asked about climate change, Bob Loonan gave a long-winded answer about carbon capture technology while Mortensen simply said “In this Republican primary, I’ve heard nobody out of the thousands of doors we knock expressing concern about climate change. So I’ll take this opportunity to talk about something else.” From there Mortensen began exposing how the political game works and how he was told by legislators/Loonan’s old drinking buddies to do nothing for his entire first term. Mortensen of course did not take that advice, within minutes of being sworn into office, Mort forced a vote to end Walz’ Emergency Powers.

For any lover of liberty or debates, this is a must see. Loonan resorts to name calling Mortensen supporters as “Mort-pansies” like a bunch of monkeys while Mort remained focused. The Establishment is desperate to take out the only fighter for freedom in the State House because Mortensen is the only Representative who has refused to kowtow to leadership, spend our surplus, wear a mask at the Capitol, vote for unconstitutional bills, or hide the truth from the public. Erik Mortensen has become the standard bearer of the Legislature for patriots across our state and Bob Loonan is a go along to get along type. The voters of Shakopee and District 54A have a very important choice for the future of the GOP, will they support liberty or RINOs?