Republicans Also to Blame for this Mess 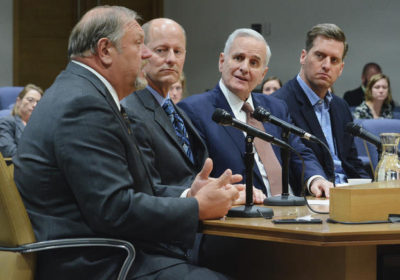 Yesterday, Governor Mark Dayton followed through on his promise and vetoed the recently passed tax-education bill and the Omnibus Supplemental Spending bill (aka Omnibus Prime). Both these bills increased government spending in a non-budget year, using up the majority of the state's $329 Million surplus. The tax bill provided modest tax rate cuts that wouldn't be fully implemented until 2020, along with conforming with the new federal tax law.

As predicted, following Dayton's veto, Republican legislators took to social media to criticize the Governor for his actions, putting all blame for the mess on his shoulders. There's truth in this criticism for sure. Despite getting nearly 75% of what he wanted, Dayton is unreasonable for holding taxpayers hostage next year by not signing the tax conformity bill. But when passing out blame for this mess, it would be useful for Republican legislators to look in the mirror.

We're in a situation now where Minnesota taxpayers will have more work to do when they file their taxes in 2019. Some middle income taxpayers will actually see their taxes go up.  Without a tax conformity bill, the state's calculation of taxable income will differ with the federal one. Since the Legislature passed a two-year budget last year that fully funded government, the only item they needed to accomplish this session was to pass a tax bill.

Republicans started their negotiations with Dayton from a position of weakness. Right out of the gate, House Republicans introduced bills that would spend 2/3 of the $329 Million budget surplus, while only providing $107 Million in tax relief. Action 4 Liberty called upon the Legislature to give all of it back and not spend a dime more. That call fell on deaf ears in St Paul.

By the way, Republicans have been running on shrinking governmentfor the last couple years.

Not surprisingly, Governor Dayton's wishes were to spend the entire surplus and shift taxes so more Minnesotans paid a bigger bill. He's the most liberal governor in the history of Minnesota. Why would anyone expect him to not be on the most extreme left when starting negotiations.

If the negotiations between Dayton and Republicans were represented by a football field, Republicans would have started in field goal range of the liberal position.

The situation worsened as the Session Deadline approached. Dayton vetoed the weak Republican tax bill stating it needed to be tied to $138 Million in school emergency funding. So Republicans in the last week attached their tax bill to an education bill that would allocate over $200 Million in funding for schools and they also dropped good provisions in the tax bill to cater to the Governor's demands.

A week later, Dayton still vetoed the bill and stated he was not going to call a special session. If you're keeping score at this point: Dayton is up by two touchdowns! All action is now placed on Republicans if they truly want to get a tax bill done before next year. Dayton is calling all the shots and there's little ground left to gain.

Imagine for a minute that Republicans took our suggestion to give back the whole surplus and not spend a dime more. They would've had a whole football field of ground to work with, inevitably leading to a final deal better than their initial proposal.

It will be interesting to see where things go from here since there is no looming government shutdown and the campaign consultancy class will make everything henceforth about the upcoming November elections. After all, you taxpayers are second fiddle to the politicians' quest to retain their power.

Make no mistake about it. The mess that we're in right now is equally the fault of weak Republicans at the Capitol who are not standing for conservative principles. The data clearly shows we're getting a bad deal out of the Republican majority. Our website mnscorecard.comcurrently shows the average Senate Republican scoring a miserable 37%; only one point higher than the average in the DFL caucus. The Minnesota House's picture is even worse with Republicans behind the DFL in average legislator votes. Our scorecard evaluates bills on a simple criteria: does the bill expand freedoms while reducing government?

We recommend you confront your Republican legislator about this record. They were sent to St Paul to drain the swamp, not to help it grow. Don't let them forget that!

SEE WHO REPRESENTS ME