Republicans Pass Bills So They Can See What's In It 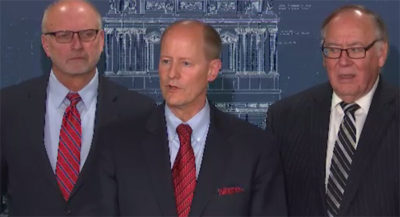 The Legislative Session came to a dramatic end late last night. Before adjourning sine die at midnight as required by our Constitution, the Legislature rushed massive spending bills to the floor. The bonding bill which totaled $825 Million of debt spending a week ago, showed up in the Senate at 11 pm last night as a different bill number and with a $1.5 Billion price tag. The bill had so much pork in it that it easily won support from several democrats, which was needed for the 3/5 majority threshold to pass.

The debt bill then headed to the Minnesota House floor and was introduced by its new author Rep Tim Miller. No debate occurred. Not a single legislator stood up and argued the bill's merits. So within minutes the clerk opened up the roll call and the bill passed 113 to 17. Only 7 Republicans voted against it.

Following the passage of the massive debt bill, the House took up the pension bailout bill (SF2620). This bill was introduced by its author, and like the debt bill, received no discussion or debate. It passed unanimously in the House, was sent over to the Senate, and received unanimous support in that chamber as well.

One could argue that Republicans last night summoned their inner-Pelosi and "passed a bill so they could see what was in it".

Both these bills were costly to Minnesota taxpayers. The pension bill lacked any significant reforms to the failing pension plan. It uses taxpayer money to bail out government employee's retirement funds. Meanwhile in the private sector, we're on our own when our 401ks under perform.

We've written a lot this session about the problems with the bonding (debt) bills. One can imagine how much worse the bill that doubles in size and is introduced at the last minute makes it.

On Saturday night, the Senate took up the Omnibus Supplemental Spending billat 10:30 pm, only an hour after the conference committee report was available. The bill was 998 pages. Senators debated the bill for an hour, with most Democrats arguing it didn't spend enough money. It ultimately passed with a vote of 35 to 32.

The spending bill then headed to the Minnesota House and debate began in the 1 am hour and lasted to 3 am. Despite its illegality of multiple subjects and its large price tag, the bill passed the Republican controlled house with a vote of 76 to 49.

Now that the session is over, we await Governor Dayton's signature. If he vetoes these bills, there might be a special session this summer. Regardless, there is no lingering government shutdown because all of this spending took place while the government was already fully funded under a two-year budget that passed last year.