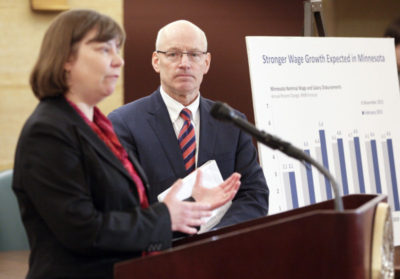 The Minnesota State Economist released the February Economic Forecastthis morning that showed the government continues to overtax us and hold a record level of our money in a reserve account. According to the report, revenue projections fell by nearly $400 Million for the upcoming biennium.

Government numbers suggest a total budget surplus of $1.052 Billion and our lazy media reports that number as accurate. However, the surplus assumes automatic 4.2% growth in spending and that government will continue to withhold a whopping $2.4 Billion from job creators and families for reserves.

Action 4 Liberty calls for Republicans to hold the line on spending and significantly reduce the budget reserves. If spending froze at current biennium levels and half the reserves were given back to taxpayers, the budget surplus would be $4 Billion

What to do with $4 Billion? Legislators could reduce income taxes, eliminate the death tax, get rid of social security taxes and never let the Walz gas tax see the light of day.