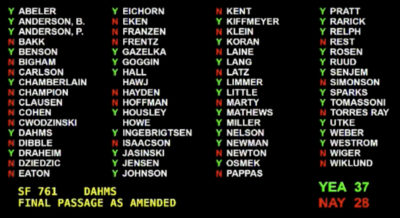 On Tuesday, Senate Republicans renewed the Reinsurance plan that subsidizes health insurance claims over $50,000 using taxpayer money. The bill (SF 761) passed with bipartisan support and all Republican Senators present voted for it.

Immediately following the vote, the Senate Republican Caucus initiated a social media campaign to brag about their "reforms" bringing down the cost of health insurance. State Senator Michelle Benson, one of the bills authors, wrote "today the Senate voted to extend the successful reinsurance program. The results are indisputable — after years of double digit increases, reinsurance held premiums in check and actually reduced costs for many customers."

Action 4 Liberty opposes the bill and believes the Senate Republicans are misleading the public. Health insurance plans are reducing in price because taxpayers are paying for the biggest cost to insurance companies.

The program is similar to the objective of ObamaCare's exchange market: to give the perception that health insurance prices are lower than they truly are. In the case of Obamacare, taxpayer money is used up front to subsidize the purchase of policies in the state exchanges. The Republican bill uses taxpayer money on the back end and goes directly to the insurance claims.