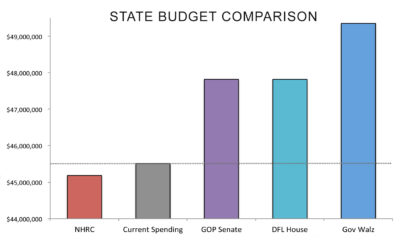 As March comes to an end, we finally know (sort of) where all the major players at the Capitol fall when it comes to the size and scope of government. On one end, Governor Walz who carries an incredible amount of weight in the negotiation battle that is soon to ensue, believes that our state government should grow to over $49.3 Billion and spend an additional $1.2 Billion in bonding debt. That budget only works by taxing us more, which is why he proposed keeping the sick tax and increasing the state gasoline tax.

On the other end of the field are the four renegade Republicans who left the old Republican House Caucus to form the New House Republican Caucus (NHRC). Their budget actually shrinks spending by $300 Million, eliminates the tax on social security benefits and repeals the estate tax.

Here's where the major players are on the State Spending Football Field.

Here's where things get complicated. The Minnesota DFL House released their numbers but the devil is in the detail. Their total spending adds up to $47.8 Billion, which is the same amount as the GOP Senate and $1.5 Billion less than Governor Walz. However, they show a negative number on transportation and the elements of their tax bill are not known. The DFL House also plans to spend $1.6 Billion in debt spending. This could be where transportation spending is made up.

The Senate Republicans yesterday released their budget numbers which grow government from current spending of $45.5 Billion to $47.8 Billion. Surprisingly, they spend more on Health & Human Services than the DFL House. Majority Leader Paul Gazelka has made several statements that the Republican Senate is not raising any taxes in their budget, which contrasts them to both Walz and the DFL House. Although, their numbers show that they are eating up a large portion of the projected budget surplus with new spending.

Action 4 Liberty believes that state government is too large already. We've learned recently that a massive amount of fraud is carried out in the Dept of Human Services and politicians keep using more taxpayer money to pay for government health care programs.  The correct course for Minnesota is to reduce the budget like the New House Republican Caucus suggests and let citizens keep their own money. If we want to shed our title as the "Least Tax Friendly State" in the county, we need to move in a different direction. It's time we become a Sanctuary State for Business!