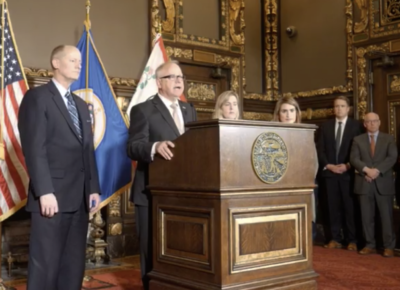 Minnesotans were left in the dark for the last week as the legislative process in the state boiled down to three key players meeting behind closed doors: Governor Walz, Senator Paul Gazelka and Speaker Melissa Hortman. The goal of the secret meetings was to come to a compromise deal then push those items into conference committee bills in less than a day for a quick vote on the Senate and House floors.

As one can imagine, taxpayers in Minnesota did not fare well in these secretive talks. The infamous provider tax, which is assessed when sick people receive care, was re-upped at 1.8%. It would represent a tax increase of over $1.2 Billion in the upcoming biennium. Senate Republicans spent the last year talking about how awful the tax is, only to cave on their no new tax pledge.

In exchange for the tax on the sick, Republicans got a relatively minuscule tax rate reduction for the middle income tax bracket. Tax filers currently paying 7.05% on income will see that reduced to 6.75%.  Of course, any tax reduction is good in our book. But this new tax change does not go into effect until 2022.

The deal also apparently includes $500 Million of bonding debt that will go towards housing projects. Future Minnesota taxpayers will be left with the bill on this one.

Education spending will receive 2% annual increases in the next two years which appears to be a complete win for the Walz Administration. Add that to the current price tag of government for the next biennium which is being reported to be over $48 Billion. With revenues projected at $47.9 Billion, the whole surplus was spent and not given back to taxpayers.

In order to pay for the increase, the state government is going to tap into the massive budget reserves. Over $2 Billion of our tax money has been held in a reserve account for the last couple of years. Now Republicans and Democrats are tapping into that account to spend on their bloated government projects.

Another horrible part about the deal is that the health insurance bailout program (Reinsurance) has been renewed for another two years. This was one of the biggest items Republicans fought for which is also something Angie Craig and Amy Klobuchar support at the federal level. It uses taxpayer money to bailout insurance companies on medical claims over $50,000.

Thanks to thousands of angry voters and activists, the awful gas tax increase was killed in its entirety. Walz wanted to increase that tax by 70%, but the tax was widely unpopular and Republicans were forced to side with taxpayers and voters on that issue despite Senators like Jason Rarick saying he would support a modest increase.

What we don't know: Fraudulent child care program funding. We assume that the Child Care Assistance Program received full funding in the budget deal, but we won't know until the HHS Conference Committee later in the day. We'll keep you informed.

The final deal will manifest into law by being added to the Omnibus bills in the conference committees. Those bills will be fast-tracked and sent to the two chambers for a final vote where legislators will have an agreement not to hold up the process with amendments. There won't be enough time today to make it all work, so we're likely to see a one to two day special session later in the week.

Action 4 Liberty thinks Minnesotans got a bad deal on this one. Instead of shrinking government, giving back the surplus and reducing taxes, Senate Republicans did the exact opposite. The only way to stop this monstrosity at this point is to tell your Senator to vote against the spending bills and tax increases. In particular, bonding debt bills require 60% of the legislature for passage.