It was Friday, August 7th, four days from the primary, and Rep Jeremy Munson went on social media to set the record straight about some last minute hit pieces on him by Republican Minority Leader Kurt Daudt's group, the MN Jobs Coalition. The Republican establishment was spending resources against the most conservative member of the Minnesota House, lying about his record and distorting the truth about his accomplishments in an attempt to help their handpicked challenger.

Munson, who received the endorsement by the Republican Party in an uncontested race, called upon the Republican Party of Minnesota to disavow the negative pieces on one of their endorsed candidates. Especially since the organization behind the activity likely shares resources with the MNGOP through its relationship with Kurt Daudt.

Surprisingly, the Party not only refused to provide a public statement defending their endorsed candidate, they proceeded to cut off the Munson campaign's access to DataCenter at the most critical time of the campaign: the weekend before the primary election. MNGOP employee Andy Aplikowski gave the campaign the impression it was retribution for the recent negative publicity state Party chair Jennifer Carnahan received from independent new site Alpha News.

A History of Vindictive Behavior

Carnahan is well liked amongst the rank-in-file GOP activists who meet her at campaign stops, rallies and training events. On the surface, she comes across as an up-beat, positive thinking spokesperson for a state party that has suffered tremendous electoral defeats for over 14 years.

But a growing number of conservative activists in Minnesota are seeing another side to Carnahan that is less flattering. She's made baseless claims of racism against long time party activists and donors behind closed doors. Carnahan is  quick to use the identity politics tactic that the left commonly employs, when it comes to her own race and gender. 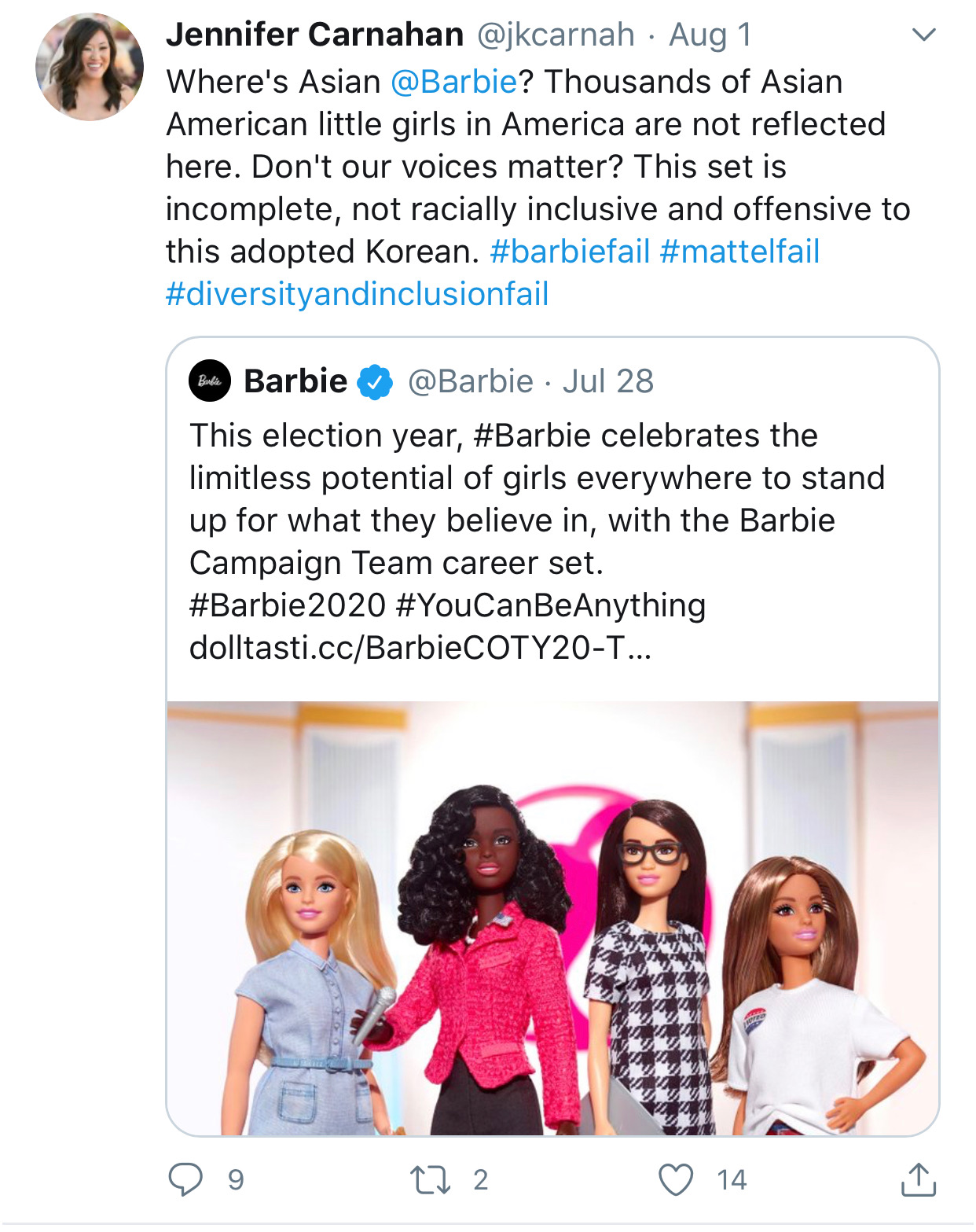 Carnahan's rocky start in GOP politics might be partially due to the fact that she was a Democrat a short time ago. Here's a fundraiser for then City Councilman Jacob Frey where Carnahan is listed as a joint host. 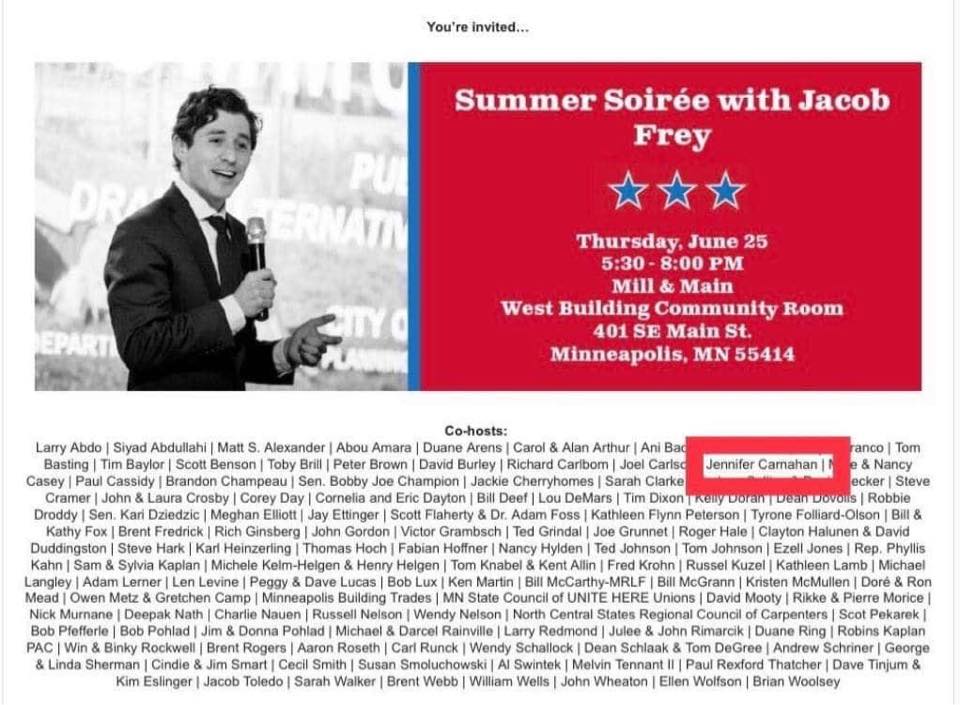 One major foul of Carnahan in her time as Party chair was when she used party resources early in the year to create a website calling a Pro-Trump grassroots group "scammers" because the group refused to work directly with the Party. We spoke with the founder of MAGASOTA who stated the reason for independence is that the MNGOP won't be as effective at reaching new audiences of potential Trump voters based on past electoral performance. Who can argue with that point?

When COVID struck, Carnahan was quick to use the same tyrannical style of power that she criticizes Governor Walz of using when she moved all Republican conventions online and administered from the state Party instead of the local Party units. We have a number of documented cases of malfeasance on behalf of the Party with this new power.

Carnahan stripped the delegate status from avid Trump supporter and GOP donor Sheri Auclair prior to the state convention. In CD8, an activist informed us that his properly filled out application for elector was rejected by the Party so that Pete Stauber's wife would win the position. In the CD7 convention, the grassroots conservative who ran for elector mysteriously did not receive the Trump endorsement, which Carnahan placed on the screen when people voted. 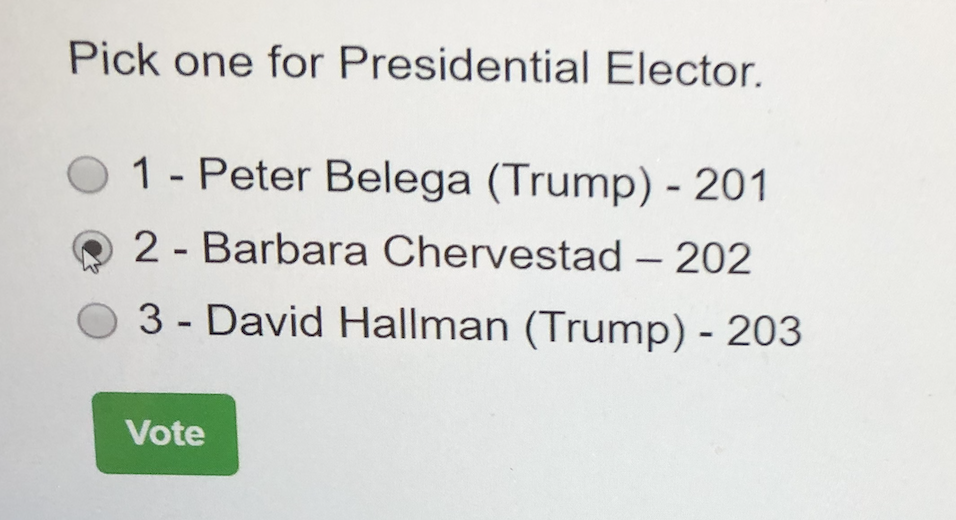 In the case of contested legislative endorsements, about a dozen delegates in the 31A race did not receive the Convention call to participate. In the 33B race, newly credential delegates that were never provided to the Stebbins campaign were registered the night of the convention. To make matters worse, a seated legislator, Rep Cal Bahr, was not allowed in the observation room to ensure proper accounting of votes. A week later, the Party made big news when the voting software they were using for the last month, had massive failures which Carnahan immediately blamed on "hacking".

The Swamp Has Taken Over

Most insiders who are paying attention have witnessed a slow takeover of the MNGOP by National Republican forces. This in part, explains the meddling in races like CD7 where the establishment picked candidate Michelle Fischbach is able to get endorsements from Trump and Pence despite being the least attractive or conservative candidate in the race. Lucky for the Party, they were able to defend that pitiful campaign in the primary.

Internal to Minnesota, Carnahan and Daudt appear to have developed quite the working relationship. After Daudt's Republican affiliated group the House Republican Campaign Committee (HRCC) spent $30k against the Party endorsed candidate Erik Mortensen in 2018, a movement to strip the HRCC of their Party affiliation was squashed by Carnahan and members of the MNGOP Exec Council. Apparently if a Party affiliated group works against the Party's endorsed candidates, there's no retribution.

In the same 2018 election cycle, Daudt's outsider group worked against Party endorsed candidates Brad Ganzer and Vince Baudette, securing victories for their hand picked candidates who, no surprise, aren't voting that conservatively in St Paul. In that case, the Jobs Coalition is an independent group and has every right to spend resources where they see fit. But where was the Party in defense of their endorsed candidates?

Who is Kurt Daudt

We've been a long critic of the House Minority Leader Kurt Daudt based on the crony tactics he uses to coerce members of the House caucus to vote for his liberal policies. Daudt's accomplishments in "leadership" reads like a Democrat's: moved Minnesota to a National ID system, bailed out Minnesota Health Insurance companies, added billions of dollars of debt and grew government by double digits.

Behind the scenes, Daudt is working to build his team of "yes men" at the Capitol while we're building a Freedom Team. We struck against his strategy big in 2016 when we took out a 22 year incumbent and replaced him with Rep Cal Bahr. Then in 2018 when Rep Tony Cornish had to resign in disgrace, we were able to help Jeremy Munson win the endorsement and then fend off Daudt's primary challenger.

But the attack on Munson goes beyond that. Jeremy also authored a bill that would ban legislators from being employed by lobbying firms, something that surprisingly isn't already on the books in Minnesota. Kurt Daudt was hired last fall by notorious Washington D.C. lobbying firm Stateside Associates. And since taking that position, legislators have received calls from lobbyists employed by Stateside. The Jobs Coalition founder is also a paid lobbyist for liberal causes, no surprise there.

Despite the lack of support from Carnahan's MNGOP and the hit pieces from Daudt's group, Munson won handedly on Tuesday's primary election night. He secured nearly a 60 point victory over the establishment's candidate. Erik Mortensen also prevailed in his rematch against Daudt's preferred candidate, Bob Loonan, in the 55A primary. Onward to beating the Democrats in November!

Conservative activists deserve a better group of representatives up at the Capitol. The stakes are greater than we've ever seen before. Governor Walz is unilaterally passing laws that are harming our economy and infringing on our civil liberties. When we got our first vote to remove Walz' Emergency Powers on April 14th, Daudt instructed most Republican members to abstain or vote against the measure. We only received 15 votes from House Republicans. This is the kind of representation we get when Daudt and Carnahan get their way.

The Republican Party is moving more to the left every day. Its leaders are filled with the same selfish conquests that the leadership of the Democrat Party possesses. In some ways, there's no different amongst the two parties. However, we know the ranks of Republican voters and activists in Minnesota and they desire a true conservative vision for this state. In order for that to happen, we at Action 4 Liberty must continue growing and shining a light on what's happening behind the scenes to take our state in the wrong direction.

If you agree with us on Ending Walz' Emergency Powers, please sign our petition below. 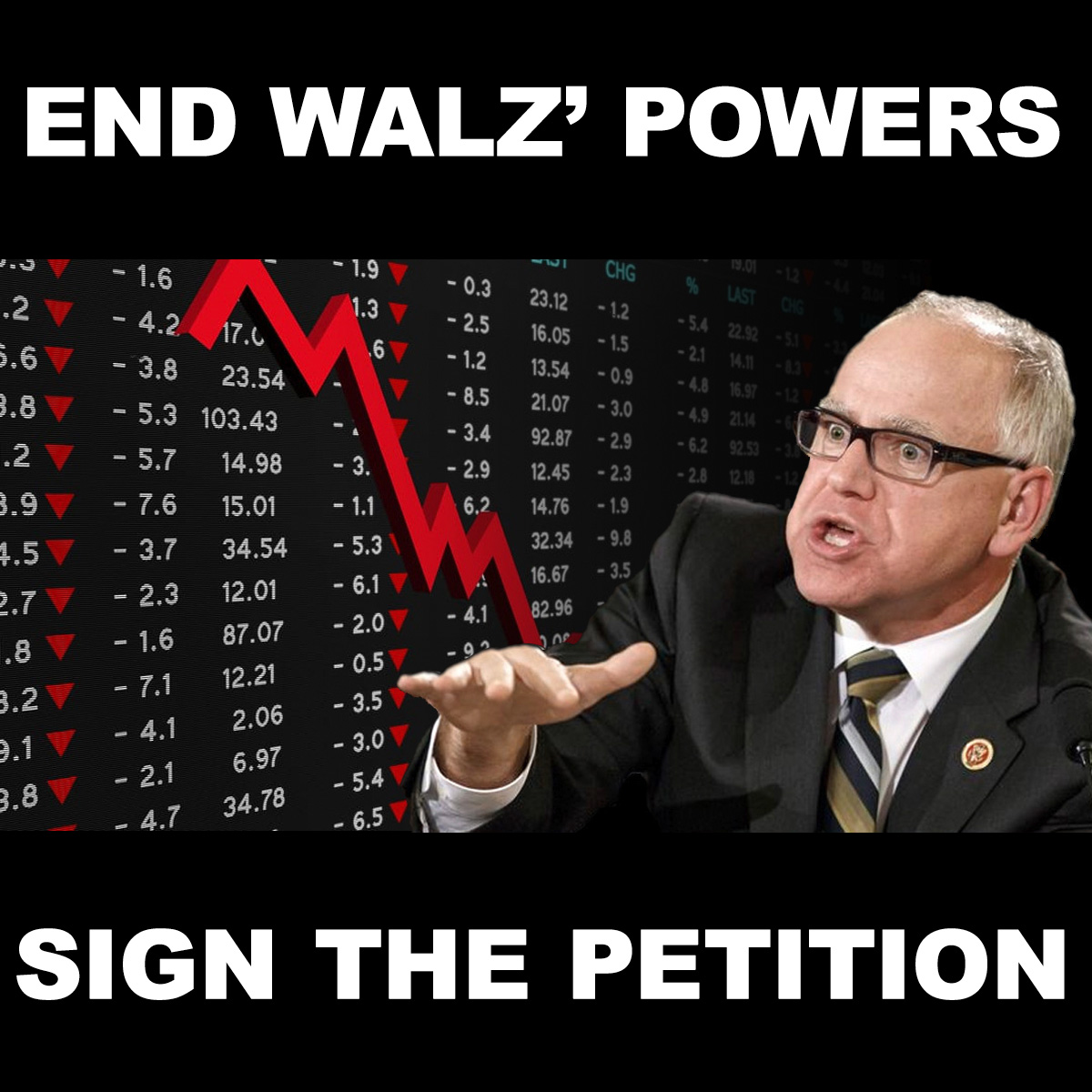