Delegate Election Fraud Covered Up by MNGOP; Gazelka Doubles Down 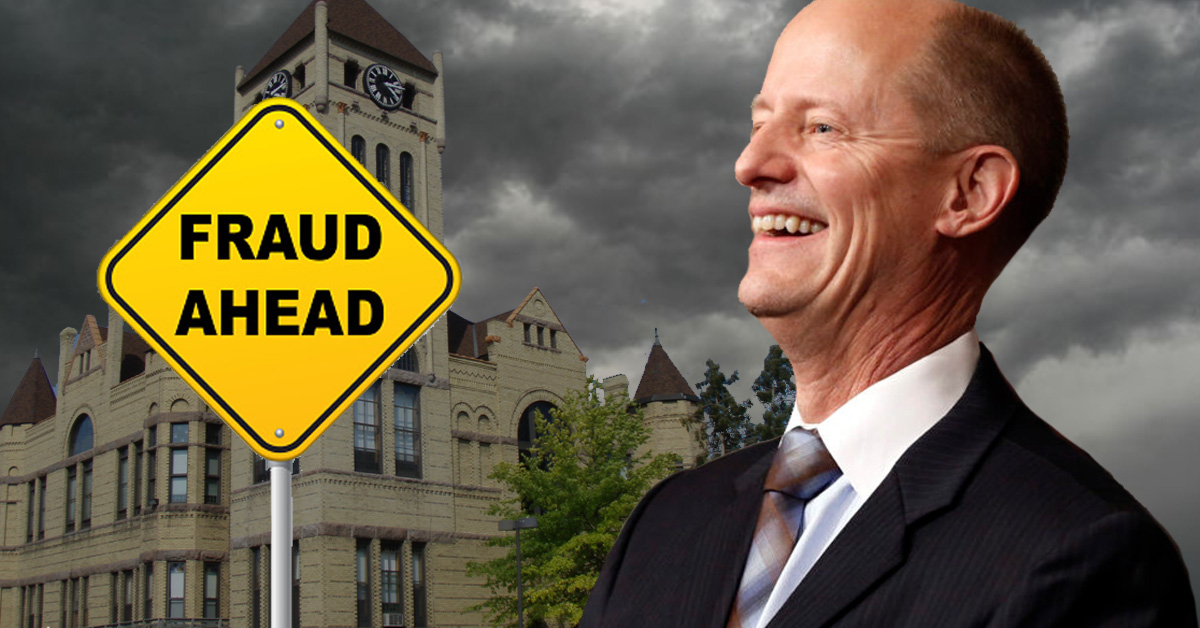 After the Morrison County GOP canceled its BPOU convention originally scheduled for Tuesday, February 22, locals were justified in asking the Party to provide more details as to why, but answers have not been forthcoming. Instead, it looks as if the MNGOP may be trying to cover up the potential fraud on delegate lists, a critical piece of the candidate endorsement process.

Minnesota State law requires political parties to hold precinct caucuses and specifies that delegate elections take place at them. The evidence that state law was broken in Morrison County is overwhelming. And all of it is targeting and disenfranchising new, conservative activists. Much of this evidence is known because State Senate Candidate Nathan Wesenberg directed his supporters to document the events of the Caucus and take pictures of their delegate sheets.

On a phone call with Dr. Neil Shah’s campaign attorney, Morrison County GOP Chair Mandy Heffron admitted to manipulating Morrison County delegate lists. Either Mandy Heffron, who at the time was also a paid staffer for gubernatorial candidate Paul Gazelka, or someone else, removed names that were elected delegates and added names which were not duly elected on caucus night. This not only violates state law, but is also a violation of the Minnesota Republican Constitution.

In several cases, the caucus precinct delegate lists did not match those sent to statewide campaigns. One egregious instance, to highlight just one, was the fact that Rep Ron Kresha’s wife appeared on the delegate sheets sent to the MNGOP after only becoming an alternate on caucus night. Dan Schilling, Precinct Chair of Little Falls Ward 3 confirmed that during caucus Mrs. Kresha was not elected as a delegate (she was elected as an alternate). Mr. Schilling’s wife Sara Schilling was elected as a delegate but her name was later missing from the MNGOP delegate sheets. There is still no response from Mandy Heffron on Mr. Schilling’s request to review the delegate form he handed to her at caucus.

We reported about these stories in our original piece last week: read here.

It has now been over four weeks since the fraud occurred. One wonders how it has taken so long for any information of substance to be shared either by Mandy Heffron or by the Republican Party of Minnesota. In fact, they are now driving forward with a March 12th convention and illegitimate delegates will have voting rights - while duly elected delegates from caucus night, will not be receiving a Convention call.

Isn’t this supposed to be the Party for election integrity?!

This is an obvious election integrity issue since delegates are the people who determine the Republican Party’s endorsement of candidates for office. There are less than 10,000 delegates statewide—strategically, every delegate matters, especially those known to be friendly to a specific candidate. When it is already apparent and confirmed that names were deleted and replaced with other names in one County GOP, one is justified in asking whether this might have happened elsewhere, too. The only way to know for sure would be for the MNGOP to be completely transparent and allow a third party, forensic audit that focuses on the electronic delegate sheets provided to campaigns and the actual documents signed by precinct chairs on caucus night.

The MNGOP does not appear to care about this violation of election integrity. All of the concerns of disenfranchisement have been ignored and they are carrying on with a convention, as stated above.

Surprisingly, Gubernatorial candidate Paul Gazelka broke his silence on this matter late on March 1st with an email to statewide delegates. He stood up for his campaign staffer Mandy’s action. He stated that volunteers like Mandy are being “maligned and smeared without just cause” and called the legitimate allegations against her and Morrison County “outright lies.”

Gazelka went on to quote scripture - “Jesus said, ‘a House divided against itself cannot stand.’" Of course, Jesus also threw out the ‘den of thieves’ occupying the temple - which is exactly what these new conservative activists are trying to do as they encounter fraud. 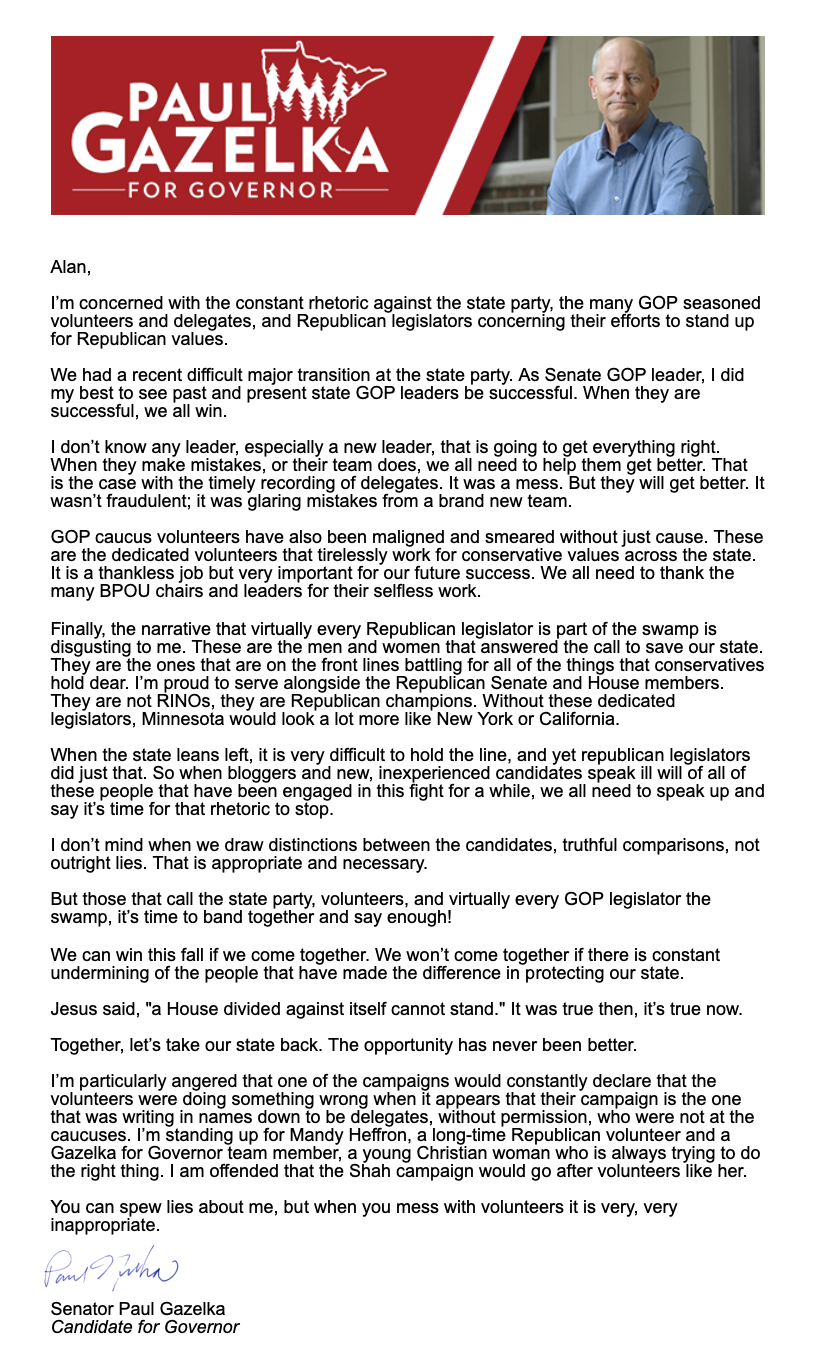 Clearly something stinks here. Why else would the Party remove Mandy Heffron from running the Morrison County Convention and put the Eighth Congressional District GOP in charge? More importantly, the Republican Party needs to grow its conservative base of legislators, but candidates like Senate Candidate Nathan Wesenberg are running into obstacles from the Party.

Wesenberg had to ask Morrison County multiple times for the delegate lists. His requests were not answered by Heffron and the State Party delayed the release of the list to him for several weeks (he received them on February 28th). Statewide candidates like Gazelka had the lists in mid-February.

Justin Krych, Deputy Chair of the Eighth Congressional District GOP Executive Committee, who will lead the Morrison County BPOU convention instead of Mandy Heffron, has so far refused to add the rightful names as delegates, suggesting they could be added back by a vote at the convention.

In a climate where transparency and responsiveness to the people are crucial (and rewarded), why hasn’t the MNGOP held itself accountable to its own rules and caucus procedure according to Minnesota Statute 202A.18?

In the same newsletter, Gazeka writes: “When the state leans left, it is very difficult to hold the line, and yet Republican legislators did just that.” However, findings by Rick Weible and Susan Smith call into question whether the state actually leans left politically based on votes cast in the November 3rd, 2020 election, already fifteen months ago. Since, the case could be made that more and more people are looking to the Republican Party for a way forward. Grassroots Republicans and activists showed up in large numbers at precinct caucuses. In fact there was a 63 percent increase in votes cast during the straw poll, a clear suggestion of heightened interest in local politics.

Is what happened in Morrison County the kind of welcome that newly engaged, conservative activists deserve?

In the broader context, the people have watched and waited for the MNGOP to serve the interests of the people, and they are still waiting. It doesn’t help matters when the Morrison County fraud was attempted to be covered up. Why? Because it makes regular Minnesotans wonder what more could be hiding behind the curtain. At the same time, this lack of transparency may inspire more people to be called to serve as elected officials, replacing those who aren’t doing their jobs.

The MNGOP is the weak point in the establishment, ripe for the emergence of leaders who will actively serve ‘We the People’ with every breath and action, who will seek the truth and speak the truth. These candidates will be a welcome contrast to members of the MNGOP establishment like Gubernatorial candidate Paul Gazelka who are twisting words to cover up the truth and many more who are absent or silent on election integrity.