Action 4 Liberty's mission is to protect liberty for the next generation. And there's no bigger threat to our liberty in this state than the abuse of Emergency Powers by Governor Tim Walz. That's why we've been focused on Ending Walz' Emergency Powers in the legislature since April and were four Democrat votes short of accomplishing it in October.

Well, if you aren't able to get them to come your way on a vote, then you take the message to their voters.

And that's just what we did!

Four of our DFL targets were fired last night thanks to the supporters of Action 4 Liberty! Brad Tabke, John Persell, Jeff Brand and Jeanne Poppe were rejected by their voters in yesterday's election.

We've been running ads against these Walz' cronies for months now, and in the case of some, spent tens of thousands of dollars recently to make sure every single voter knew that their politicians were responsible for the shutdown. 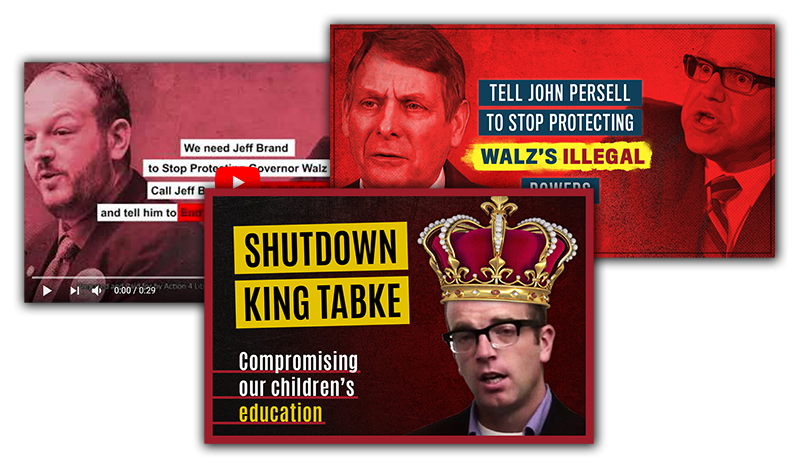 The ads that were paid for by thousands of our members and supporters were highly effective.

But the battle does not end with the election. Most people in politics are folding up the tables and stacking the chairs. Not Action 4 Liberty. We not only MUST FIRE TIM WALZ in 2 years...or sooner. We also have another chance to End Walz' Emergency Powers just around the corner.

Walz has to call back the legislature again next week if he wants to continue his Emergency Powers for another 30 days.

As winter approaches, our Tyrant-in-the-Making Walz is on the cusp of shutting down our schools and possibly our businesses again. There's no end in sight to what he thinks he can do to our liberties.

That's why Action 4 Liberty will use the election results as a spring board to turn up the heat against our out-of-control state government. They've seen the impact we can make and now they must vote the right way, or suffer future electoral defeats.

Not only did we get rid of that crony politician Brad Tabke in Shakopee, but we also got a liberty champion elected with Erik Mortensen.

Recruiting top notch candidates like Erik Mortensen is a big part of what Action 4 Liberty does. This is how we plan to make fundamental reforms in Minnesota that bring back our liberty.

Stay tuned to Action 4 Liberty as we prepare our weapons for next week's battle to End Walz' Emergency Powers. Thank you for all your support so far.

Join Us. Become a monthly donor