Government is Lying to You - There's No Budget Deficit

Another economic forecast was released today by the state economist. Instead of showing a massive budget shortfall, like was projected back in May, the government is now predicting a $641 Billion budget surplus for the fiscal year ending in June. Of course, in our opinion, that money was overtaxed and should go right back into the hands of our overburdened taxpayers.

Interestingly, the forecast also says there will be a budget deficit for the upcoming biennium. The media and politicians were quick to get their messaging out to the masses, but few actually look at the numbers. When the government creates forecasts, they assume spending will grow in the next biennium. In the case of today's report, they calculated a 7.3% increase in spending. The current budget totals $47.6 Billion and they used spending for the upcoming budget of $51.1 Billion.

But no budget has been enacted yet. That's the role of the Legislature and Governor at the beginning of odd number years: to determine the upcoming biennial budget. If you crunch the numbers with current spending, we actually have a $2.9 Billion budget surplus. On top of that, they are holding onto $1.9 Billion in a Reserve account for future political spending. 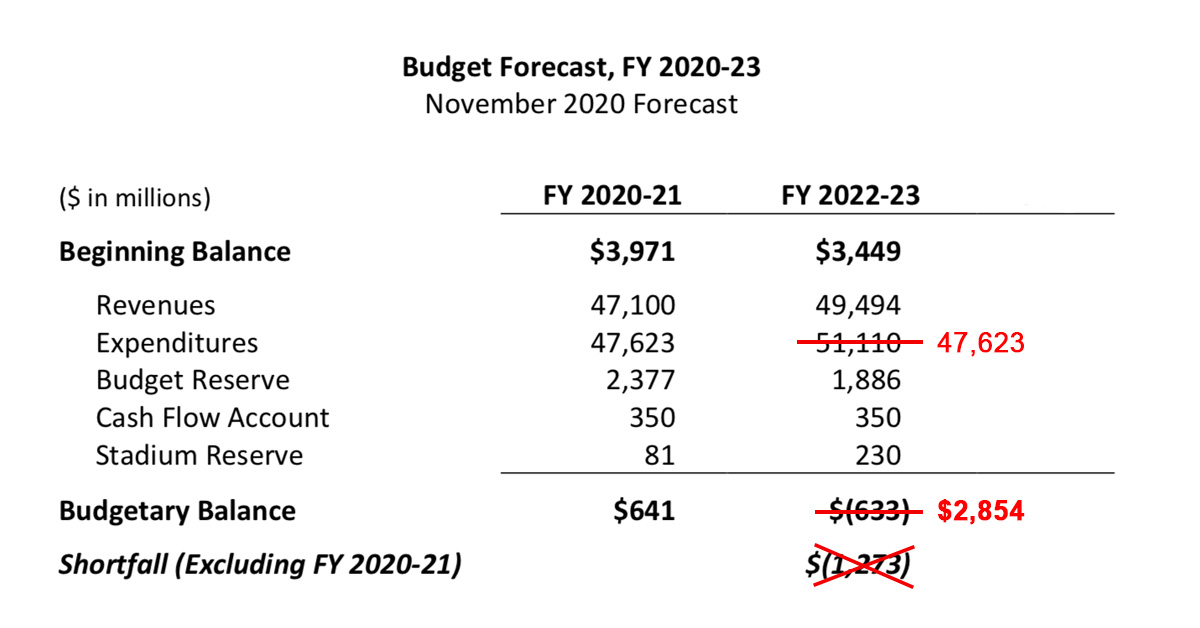 Why is this important? The Democrats will argue that we must raise taxes on Minnesotans to balance the budget, therefore locking in a 7.3% increase in state spending. RINOs will argue that we should cut spending by the budget deficit amount, then act as if they are actually cutting spending. They're not. Ever heard the phrase: cut the growth of spending?

Politicians are growing spending by a lot, then coming back and telling us we're short the funds! What a bunch of frauds!

Meanwhile, Minnesota taxpayers are not getting the same level of service from government during COVID. So we should be receiving money back from the government since they keep taking it from us. Especially those in the hospitality and fitness industries. Demand they Give it Back!

GIVE BACK THE SURPLUS!