Record Abortion Funding with Your Money 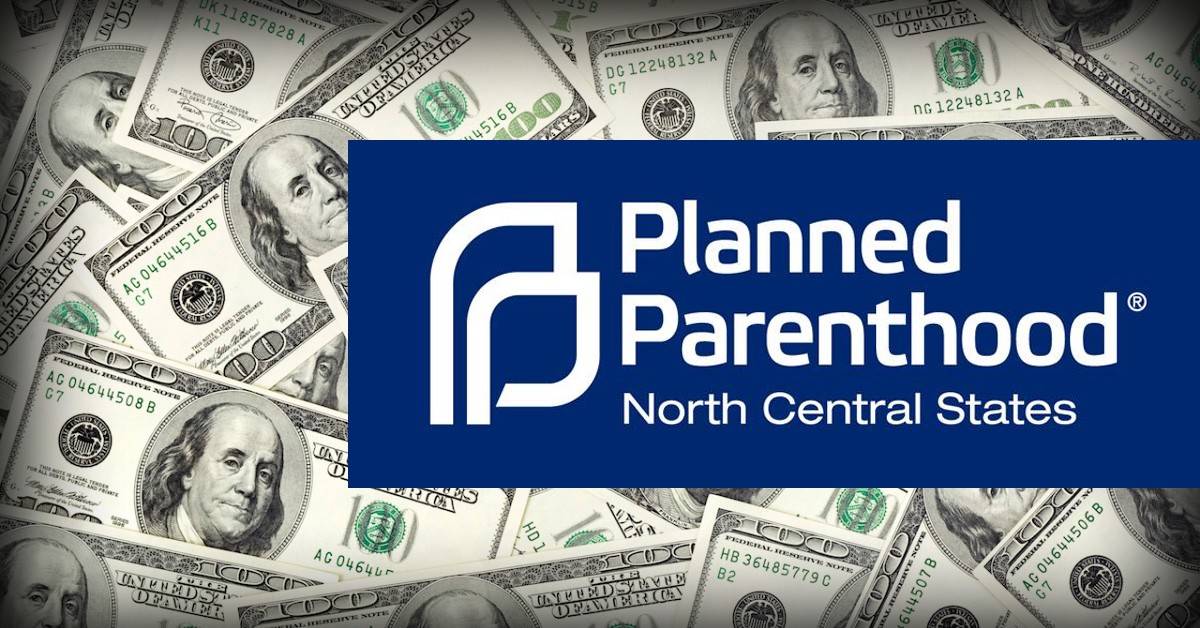 Your tax dollars continue funding abortions at Planned Parenthood because politicians appropriate money from the Medical Assistance program in the Health & Human Services (HHS) Omnibus Bill. We reported on the source of publicly funded abortions back in 2019 in the article How Minnesota's Planned Parenthood Gets Your Money.

MCCL issued a press release recently in response to a Human Services Department report that showed "taxpayers reimbursed abortion practitioners just over $1 million for 4,410 abortions during the 2020 pandemic year." The $1 Million mark set a new annual record in abortion funding in Minnesota. 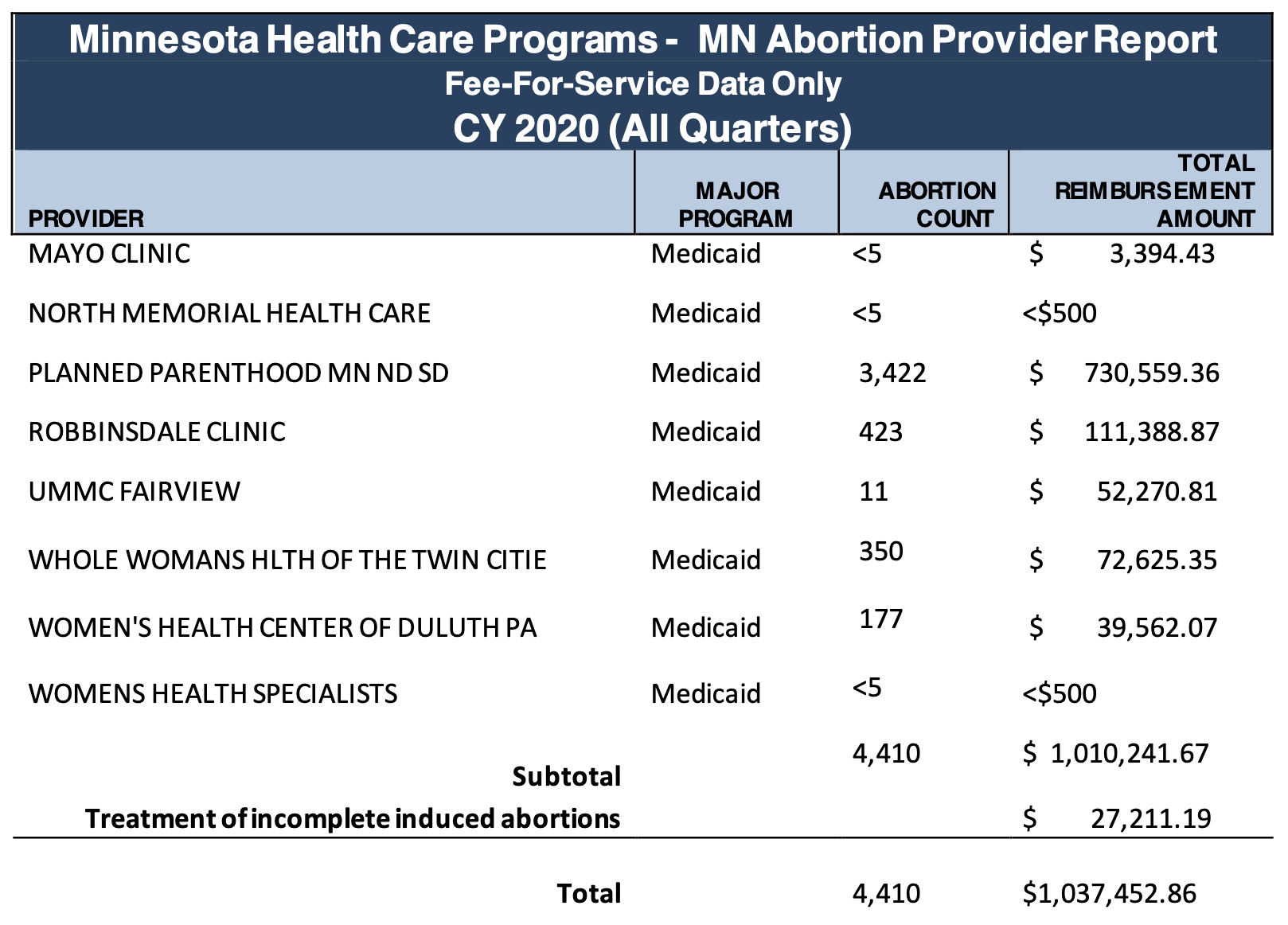 While MCCL appeared outraged by the report, they ignore the mechanism used to fund abortions - appropriating money to the Medical Assistance Program through the HHS Omnibus Bill. Senate Republicans voted overwhelmingly for the legislation. MCCL continues endorsing politicians who vote for the funding of abortions in the HHS Omnibus bills.

Taxpayer funding of abortions and multi-subject omnibus bills have been a contentious issue in the Republican ranks during this endorsement season. Conservative, outsider candidates have used votes for the HHS Omnibus bill funding against their Establishment backed opponents. In response, the Political Class argues that a MN Supreme Court decision, Doe v Gomez, prohibits them from cutting abortion funding from the Medical Assistance program.

Doe v Gomez was a 1995 ruling. MCCL has been unsuccessful at passing legislation to overturn the Court's ruling for 27 years now. And for those three decades, while abortions were being funded by our tax money, MCCL has given a pass to the legislators who continually appropriated funds to the Medical Assistance Program. Voting against the Medical Assistance appropriation would have killed the taxpayer funded abortions. Here's why...

The Legislature holds the purse strings. Only the legislature can appropriate money, not the Minnesota courts. If the Senate Republicans unified against the HHS Omnibus Bill, then Doe v Gomez would have no jurisdiction since the money was not appropriated by the legislature. 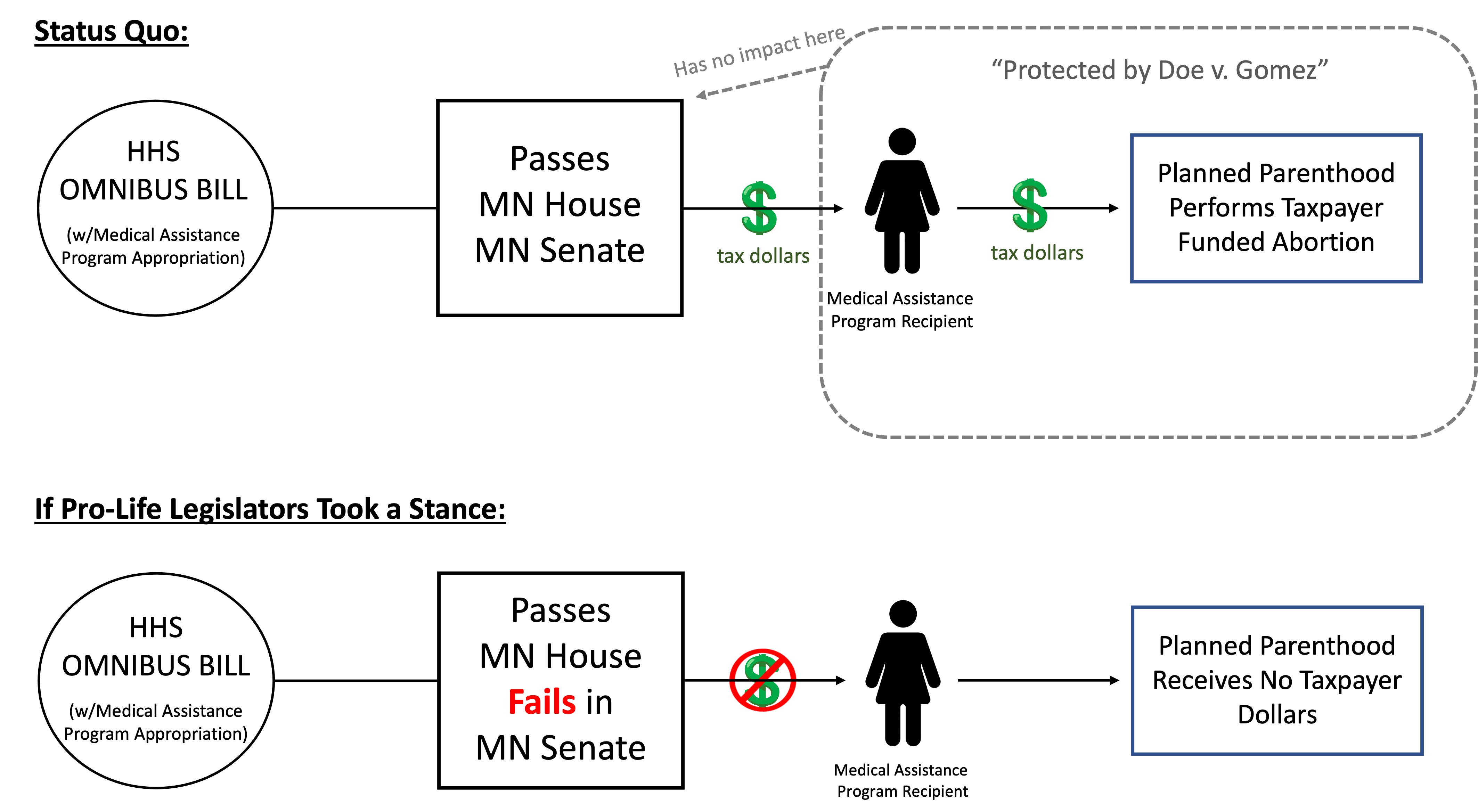 Here's a video of Gubernatorial candidate Paul Gazelka admitting to voting for abortion fund, while lying to a Christian audience by stating "I can't stop it":

Why is the Medical Assistance program tucked inside a 500 page Health & Human Service Omnibus Bill in the first place? If Republicans were serious about cutting the funding, they should have a stand alone bill (which is required by the Constitution anyway). Then there is a straight up-or-down vote on approving the Medical Assistance program where $1 Million of your tax money is used to kill the unborn.

Gubernatorial candidate and state senator, Michelle Benson, was the senate author of the HHS Omnibus Bill. She touts a pro-life record on the campaign trail. The Medical Assistance appropriation is on page 454 of her bill:

Imagine legislators introduced an omnibus bill that contained an appropriation for a program called "Animal Assistance." If the Animal Assistance program provided funding to puppy mills that killed unwanted little puppies, can you imagine the outrage? The appropriation would be a contentious political issue. Legislators would be lining up to remove it from the omnibus bill or better yet, complaining how they were voting on unconstitutional omnibus bills in the first place. After all, 100% of legislators are aligned on not killing puppies with your tax money.

So why aren't the pro-life legislators doing the same thing when it comes to abortion funding? Abortion kills a human life - don't we deserve legislators who stand up and do everything possible to stop it?!

Every legislator has the ability to vote "No" on legislation. The courts can't force a legislator to vote "Yes." If a majority of legislators voted against the HHS Omnibus bill, the money would not be appropriated, and those lives would be spared.

We need legislative courage from them. This IS the hill to die on. Aren't we trying to save human lives? That kind of courage would also force an end to the practice of passing large, unconstitutional omnibus bills. Legislative leadership would be required to introduce individual bills containing single subjects - the way our Constitution states must happen.

Here's how your state senator voted on the HHS Omnibus bill that funds abortion:

The Minnesota House was a party line vote. In previous bienniums, Republicans voted for the funding in their version of the HHS Omnibus bills.