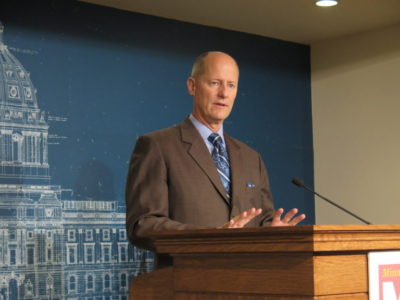 Senate Republicans announced their top four budgetpriorities this morning, ruling out a cut in actual government spending. Instead, they plan to "control spending" referencing the 39% growth over the last 8 years as something that needs to be restrained. However, Senate Republicans overwhelmingly helped pass a budget last biennium that grew government by 10% and also added $2.5 Billion of bonding debt.

Absent from Senate Republicans' priorities is a statement about giving back the surplus to taxpayers. Action 4 Liberty reported that there is nearly $5 Billion of surplusavailable to give back to Minnesota taxpayers. Instead, Senate Majority Leader Gazelka discussed continuing expensive programs like the Health Reinsurance program that Republicans passed last year. That legislation uses taxpayer money to cover insurance claims over $50,000.

Action 4 Liberty believes that Senator Paul Gazelka and his team have let down Republican voters again by not proposing to shrink government and return the surplus. They show up to conventions telling us that government is too big, but never actually propose shrinking it. On top of that, they are starting in a position of weakness in negotiating the next two year budget with the DFL controlled House and Governor Walz.