Senate Republicans Spend Most of Surplus 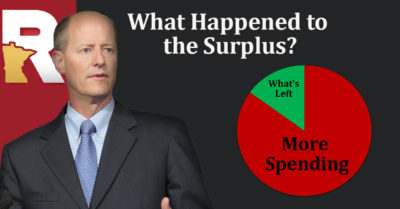 Minnesota legislators started the 2019 Legislative Session with a massive $4 Billion surplus. If they didn't spend a dime of new money on our bloated state government that wastes money on MNLARs fixes, Brazilian wood rest stops on I-35 and a fraudulent child care program, we taxpayers could have had a huge tax cut. Taxes on social security income could have been eliminated. The death tax could have been distinguished. And large tax reductions across the board could have been passed.

Instead, the Senate Republicans have spent about 85% of that surplus on more government according to the most recent budget negotiations with Democrats. Senate Majority Leader Paul Gazelka was willing to spend an additional $200 Million of our surplus money to compromise with tax happy Governor Walz. His proposal out of the gate already spent the majority of the surplus, leaving only $800 Million for the Senate tax bill.

A budget surplus means that taxpayers have been overtaxed. The conservative belief is that money should be returned to taxpayers. But Gazelka and Republicans Senators seem determined to spend the money on more government.

Governor Walz and House Democrats take things to a whole new level. They blew through the budget surplus with new spending measures and want to increase taxes on top of that. At least, as of the writing of this article, it appears the Republican Senate isn't willing to compromise on the gas tax.

Action 4 Liberty remains focused on holding Republican Senators accountable. They keep telling us during election years that they believe in small government, but they don't actually do that once elected at the Capitol. We think you deserve better representation. Your taxes should be going down; not going towards more bloated government.