The Freedom and Opportunity Budget 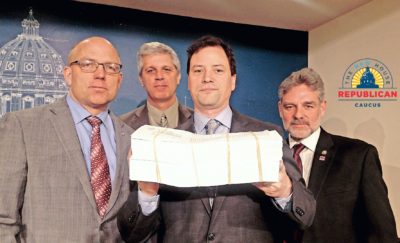 The New House Republican Caucus is the first legislative group to propose a budget following the release of Governor Walz’ bloated, tax-raising budget proposal. Unlike past proposals by Republican caucuses that grew spending, their budget actually cuts government by over $300 Million. Total spending would be $45.2 Billion under their plan.

According to the February budget forecast, the state government expects to take in $47.5 Billion in revenue and would have over $50 Billion in resources when accounting for the massive budget reserves currently being held by the state.

The New House Republican Caucus plan would eliminate taxes on social security benefits and the estate tax penalty. It would also give Minnesota citizens a one-year fee holiday for vehicle license and tabs using a billion dollars from the reserves account.  On top of that, the proposal conforms with federal Section 179 deductions, permanently retires the health provider tax and makes money earned via tips tax free.

Where Are the Cuts?

Overall, the proposal cuts current spending levels by only 1% with areas like E-12 Education and Public Safety receiving marginal increases. However, over $300 Million in savings comes from the Health & Human Services budget where programs like the Child Care Assistance Program are funded.

How the Budget Compares to Governor Walz’ One Minnesota Plan

Governor Walz’ budgetgrows government by 9% adding $4 Billion in new spending. To pay for the massive budget, the Governor proposes reinstating the provider tax and increasing the gasoline tax by 70%.

If state spending was represented by a football field, the New House Republican Caucus would be in the Small Gov't End Zone, the complete opposite side of the field from Governor Walz.

Action 4 Liberty believes the New House Republican Budget proposal should be adopted by Senator Paul Gazelka and the Senate Republican Caucus. This plan keeps the promises of Republicans who keep telling us they want to cut government. It also places Republicans in a position of strength when dealing with the Democrats at the Capitol who want to massively expand the size and scope of government.