They're Betraying You with A Fake End Walz' Power Bill

Things are moving incredibly fast in politics right now, so let me catch you up on where things stand right now...

Liberty champion Erik Mortensen was prepared and ready to make another motion on Monday to get a vote on the End Walz' Emergency Power Resolution. His objective this year is to stop Walz' unilateral reign and then make him pay for it.

Seeing that he was going to be upstaged by a freshman legislator, Minority Leader & RINO Kurt Daudt arranged a deal with the Democrat Speaker to be recognized first on the exact same motion. Of course, with Daudt, an agreement was made between Democrats and Republicans that there wasn't going to be a chance for success on the motion. Instead they have other ideas for Minnesota. More on that in a minute.

What was most telling about the vote is that Reps Marquart, Pelowski, Sandstede, Lislegard, Sundin and Ecklund are clearly a bunch of Con Artists who betrayed their voters. Last year, with an important election looming, they voted to remove Governor Walz' Emergency Powers when the chance of it passing was small. But now when their vote mattered, they reneged on their promise to their constituents.

Which means it's our job now to apply pain! That's all politicians respond to in the end. They care about one thing: getting re-elected. So we're making sure that voters in their district know about their betrayal.

We now have radio ads up in Winona, Moorhead, Hibbing, Virginia, Moose Lake and Cloquet. Here's our ad on Con Artist Julie Sandstede: 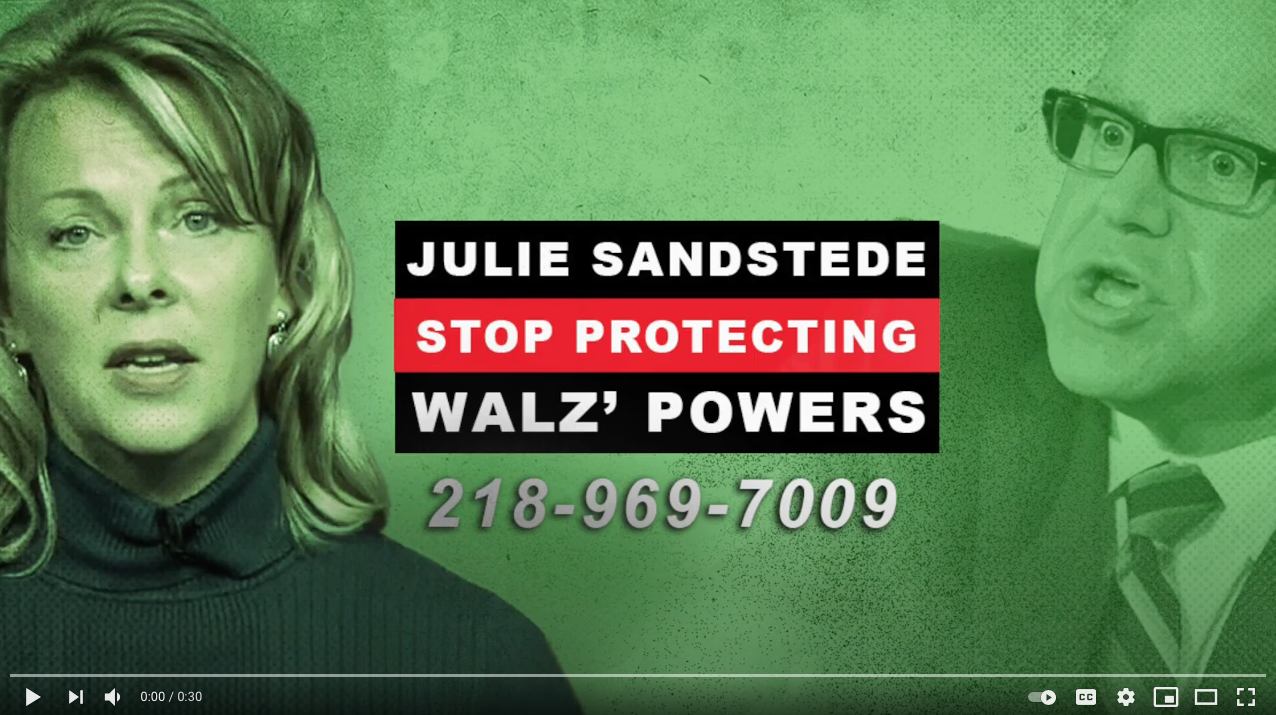 We also have lit dropping teams heading up to several districts this weekend to spread the message of how politicians like Julie Sandstede are betraying them. 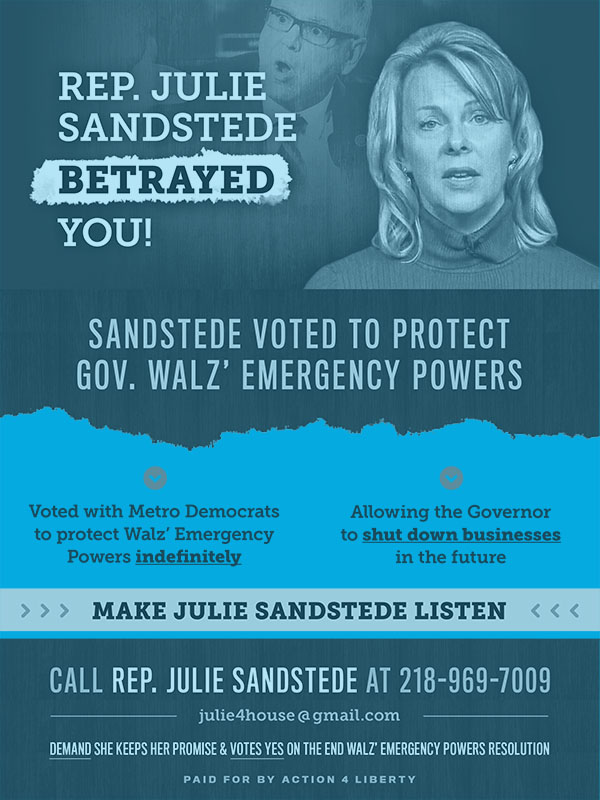 Now, the betrayal doesn't stop with these six Democrat Con Artists. There's also a significant problem in the Republican ranks. Remember when we told you last week how this fight would go down? Let's recap...

First they will try to Kill the Resolution. The Democrats certainly did a good job blocking it the first week of the Legislature, but we got around that hurdle.

Secondly, they would avoid hearing it. Well, that didn't work either because we understood the rules of the House. So we got a vote on Ending Walz' Emergency Powers.

When killing and avoiding doesn't work, Democrat, and even Republican leadership, will start watering down the Resolution. And that's precisely where they want this battle to go!

While we are busy getting clean votes on the End Walz' Emergency Powers Resolution and pressuring vulnerable Democrats to do the right thing, Daudt and Democrat leadership are behind closed doors, crafting a Fake End Walz' Power bill. In fact, they even assembled a special committee with Con Artist Gene Pelowski and RINO Kurt Daudt as the leads.

SEE WHO IS ON THE FAKE END WALZ' POWERS COMMITTEE

The committee is tasked to create a bill, some time in the next couple weeks, to reconfigure Chapter 12 Emergency Powers law. In other words, they are seeking to make Walz' powers permanent.

Here's how you know it's a Fake Bill. Unlike the End Walz' Emergency Powers Resolution, a bill actually requires the Governor's signature. How good could this bill be if Governor Walz is willing to sign it? Either they'll pass something so pathetic, and irrelevant, or they will waste a month of our time with the false hope that Walz' Powers will be killed, only to watch him veto it in the end.

That's why we MUST oppose the Fake End Walz' Powers bill.

Any self respecting conservative should not be running cover for Walz with a Fake End Walz' Powers bill. In fact, there should be NO DEALS, NO COMPROMISE, NO PASSING ANYTHING in the entire House until the Emergency Powers are squashed!

But a couple Republicans lined up to be on the Committee to draft the Fake Bill. One of them is Rep Marion O'Neill. What is she doing on this committee? She represents a strong, conservative district in Wright County who would be up in flames to know that she is doing this?

And what about aspiring gubernatorial candidate Rep Barb Haley of Red Wing? Why is she working against us to craft such a piece of garbage?!

To sum things up. We learned this week that Reps Marquart, Pelowski, Sandstede, Lislegard, Sundin & Ecklund are a bunch of Con Artists who betrayed their voters on Ending Walz' Emergency Powers. It's our job at Action 4 Liberty to bring the pain, which is why we are executing a large pressure campaign in their districts. As pointed out last week, when they can't kill the Resolution or avoid hearing it, they will water it down with a Fake End Walz' Powers bill. Unfortunately, Republicans like Marion O'Neill and Barb Haley are betraying their voters by participating in the crafting of the fake bill.

Let's keep the pressure on these legislators. We've been building resources for this fight and we know YOU will keep helping us out until we finally win and End Walz' Emergency Powers once and for all.