Walz Breaks His Own Rules - Why Should We Follow Them?

Governor Walz broke several of his own orders while attending the highly politicized Memorial Service for George Floyd on Thursday. According to Walz's numerous press conferences on extending his illegal orders, his administration is using "science" to protect the health of Minnesotans by reducing the spread of COVID when ordering social distancing, the use of facemarks, reduced capacity, etc. Many of these orders were broken on Thursday and according to Walz' own statements, "endanger the public".

According to the Pioneer Press, Walz' order of 250 person maximum capacity was violated as they counted around 500 people in attendance for the service. The image provided by the Star Tribune shows Walz not adhering to the six feet social distancing rules, which is the basis of the capacity rule.

Walz Executive Order that was announced by his administration on May 23rd states: 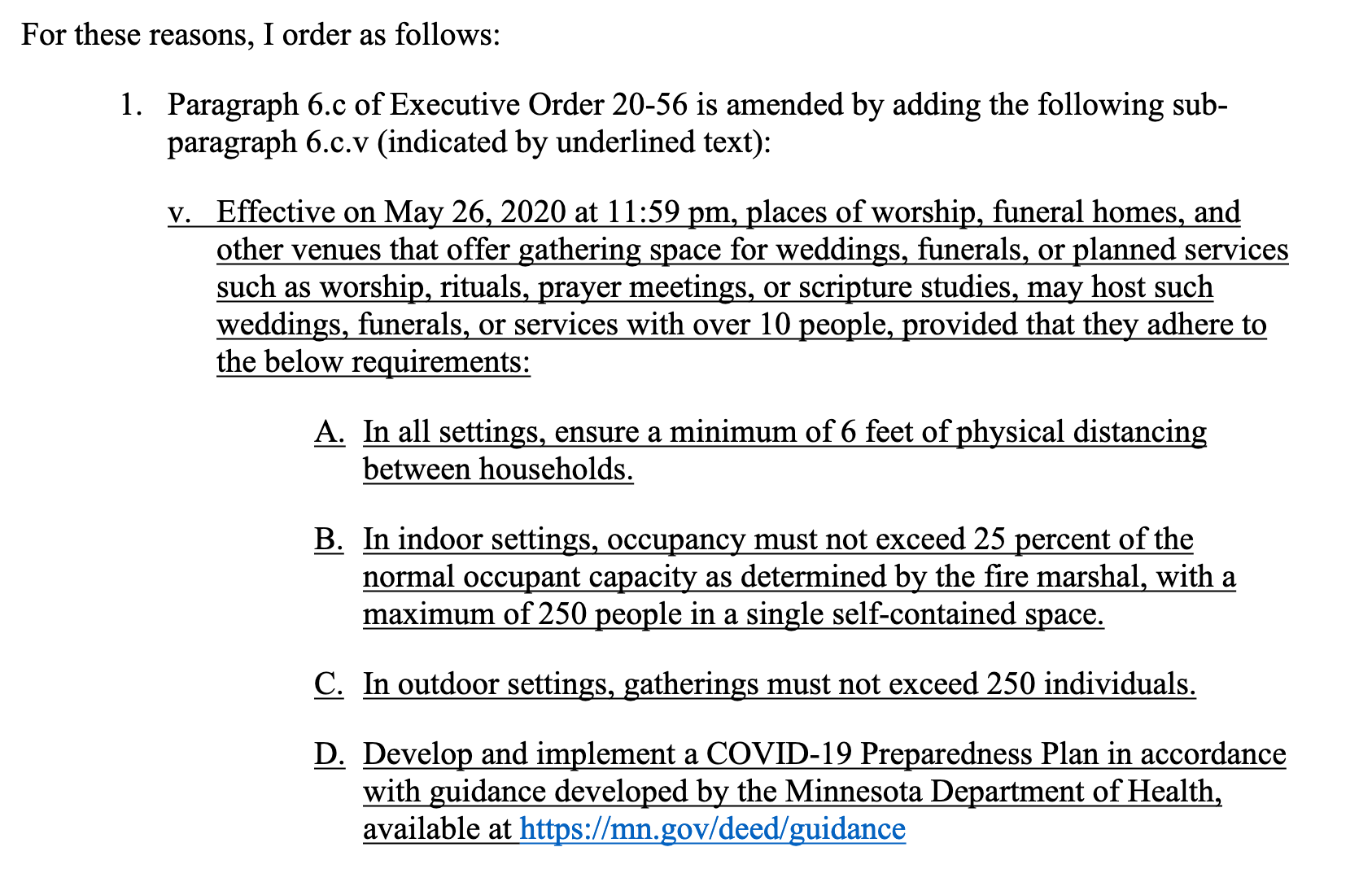 Walz states in the executive order that he continues "to urge all Minnesotans to limit their in-person interactions with people outside of their households. And, as I have emphasized in previous Executive Orders, I strongly urge Minnesotans at heightened risk to stay home except for essential activities, and I urge faith communities to continue to provide remote services to the maximum extent possible."

Although not part of the executive order, Walz made an infamous statement when extending his orders in May that people should not sing in church. Floyd's Memorial Service was filled with singing. His Dept of Health has this recommendation on its website:

All of this occurred while Walz is keeping Minnesota restaurants, bars, camping/resorts and fitness clubs partially or fully closed for the exact reasons as stated above. Meanwhile, Wisconsin has had no spike in COVID related deaths in the three weeks since it reopened.

Action 4 Liberty has spoken to hundreds of Minnesota businesses in the past two weeks who are on the cusp of failure if they don't reopen immediately. Yesterday, Walz slapped those businesses in the face by ordering only a partial reopening on June 10th, costing them another weekend of revenue (we only get so many nice summer weekends here).

At this point, why would anyone follow Walz' illegal orders if he won't do it himself? The orders are clearly not based on well established science. All of the modeling data they used for policy-making has been overblown. And we know now that the virus mostly kills people who are already passed the life expectancy age, with few exceptions that are based on other underlying health issues.

Sure, the killing of George Floyd is tragic and we certainly aren't arguing against his family holding a funeral service. But all Minnesota families who have lost a loved one in the past couple months also deserve the same treatment by Governor Walz, even if it doesn't get him social browny points with voters.

Walz broke his own rules - it's time we break them as well.