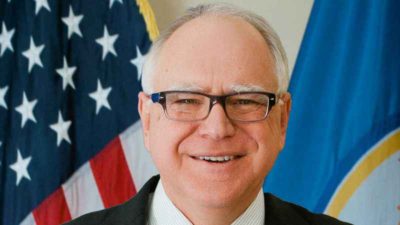 Governor Tim Walz just released his first budget proposalthis afternoon. Instead of prioritizing giving back the massive budget surplus to taxpayers, Walz proposes spending it all and increasing taxes. His budget grows the state government by $4 Billion or 9%.

On top of that, the Governor briefly mentioned an additional $1.3 Billion in debt spending. Walz plans on releasing a proposed bonding bill next week.  Currently our state government pays $1.3 Billion each biennium just to service our outstanding debt.

As promised on the campaign trail, Walz wants to create a public option in health care for all Minnesotans. His proposal comes with several promises like lower visit costs and prescription drugs prices. He wants to expand the public option to include dental benefits.

How to pay for all of this? Governor Walz proposes increasing taxes by reinstating the health care provider tax and increasing the state’s gasoline tax. Currently, Minnesota’s gas tax falls in line with the national average.

A recent study by Kiplinger ranked Minnesota as the least tax friendly state in the country. Walz appears to wear that ranking with a badge of honor as he expands the egregious taxes that Minnesotans will pay.