What Does it Mean To Be a Republican Anymore?

I've been a Republican since I first got involved in politics in high school over 20 years ago. Like many others in the Republican Party, I would strengthen my views by listening to Rush Limbaugh, watching Fox News and reading the books by the biggest minds in the conservative movement. It was obvious to me that we all stood for individual liberty and the free market. Meanwhile, the Democratic Party had been moving closer to the socialist parties of Europe.

But then came March of 2020 and our identity is in serious crisis. It was a little over a year ago when I heard President Trump state boldly in his State of Union address that the "United States will never be a socialist country." We all applauded when he said it, but it appears few Republicans believed it.

Trump last week revealed his response to the COVID-19 outbreak and it was an American socialist's wet dream. He wanted to use the printing press to create a trillion dollars of money out of thin air to redistribute to Americans under a certain income level, while leaving the rest paying the bill.

Quickly, that trillion dollars doubled, and by the time Congress got its hands on it, the proposal became a $2 Trillion omnibus bill full of pork. The bill passed the U.S. House on Friday despite the heroic challenge of Rep Thomas Massive (R-Kentucky) who demanded a quorum be present and that the vote be recorded. Massie's insistence was a nuisance not only to Nancy Pelosi and the Democrats, but also drew intense criticism from Republican leadership...and President Trump.

How dare he demand such things! This isn't a time for following the Constitution! Sadly, these sentiments of the crony political elite in Washington won the day. And Minnesota's Republican delegation were all in lock step with the Swamp: Emmer, Hagedorn and Stauber.

To make matters worse, the chairwoman of the Republican Party in the state is cheering this socialist bill on. She posted on facebook how Congress needs to act and pass the bill. 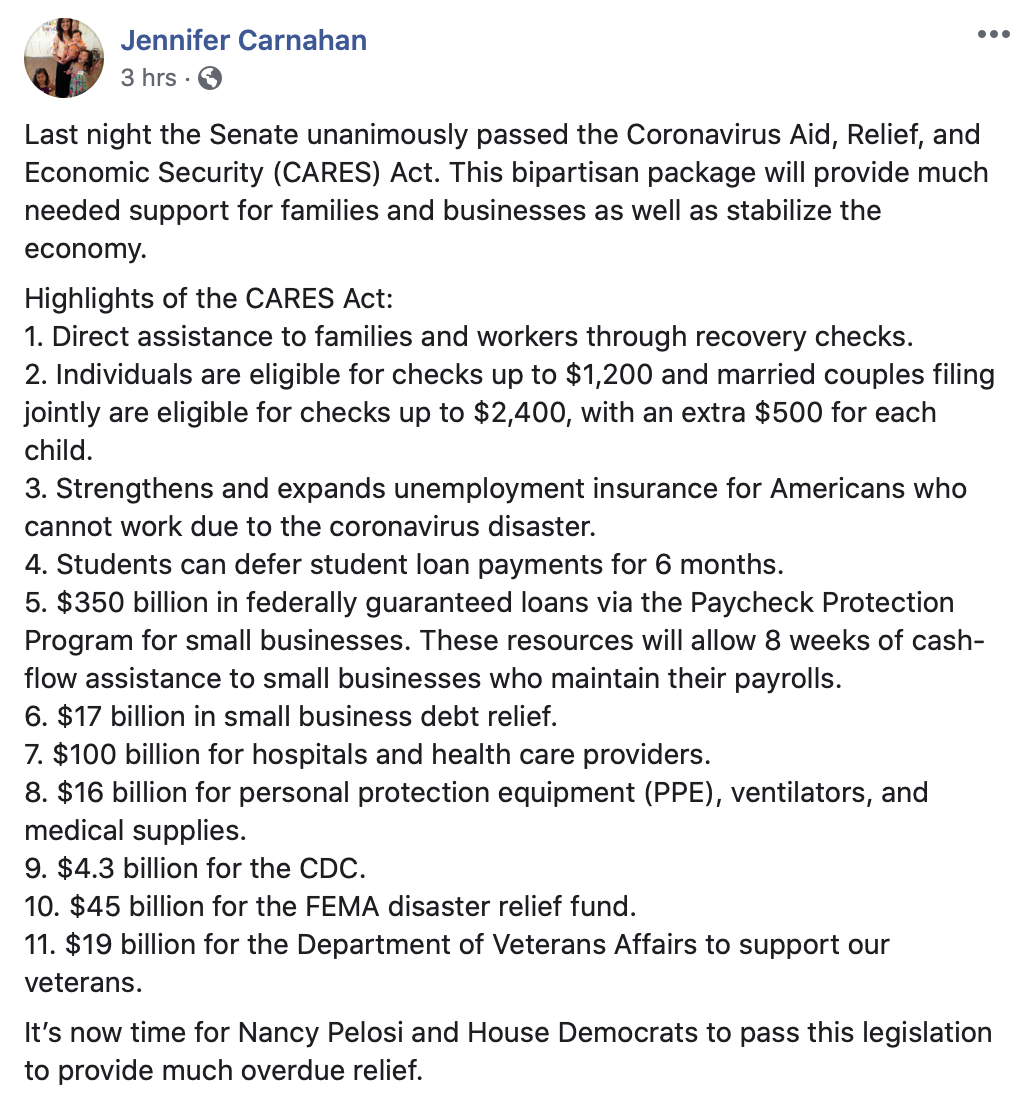 Carnahan, who is basically just taking marching orders from the Republican National Committee at this point, is moving forward with an unprecedented power move for Republican Conventions. After canceling all local Republican conventions in the state back on March 12th, she's now moving them electronically against the rules of the Party. Worse yet, the State Party will now be in charge of running the local conventions and votes will be sent directly to them. One can only imagine how the candidates running against the Swamp will fare in this scenario.

Meanwhile, the Minnesota Legislature convened on Thursday to give Governor Walz hundreds of millions of dollars in new spending, using the budget surplus to pay for it. Republican Reps Drazkowski and Munson, who publicly wanted to give the surplus money back to taxpayers, challenged both the Democrats and Republican establishment on the house floor before the vote.

The rules of the House were suspended to not allow floor amendments. It did not go through the committee process where legislators could weigh in on it. And the bill was written in private by just a handful of people. Most legislators likely didn't read the bill before voting for it, since the 33 page bill wasn't available until minutes before the vote. But Republican Minority Leader Kurt Daudt went to the floor bragging about the hard work put into crafting the legislation and got the whole Old House Republican Caucus to vote for it. Only four Republican members opposed it: Reps Drazkowski, Munson, Bahr and Miller.

In typical fashion, the spineless Republicans in the Senate Majority all joined the Democrats and voted for the bill unanimously. Now the Governor who has usurped Constitutional powers by shutting down businesses and quarantining citizens in their homes, has a couple hundred million dollars more to spend. But Minnesota families won't see any relief from St Paul as politicians have failed to give the surplus and "rainy day" funds back to them.

So what does it mean to be a Republican anymore? Objectively, this Party is not about free markets, fiscal responsibility or LIMITED GOVERNMENT! What is the point in having principled views when you don't turn to them in times of crisis?

The Democrats have positioned themselves to win even if they lose at election time. I can't imagine a better scenario than to have your opponent do your work for you. Bernie Sanders must be so proud that while his campaign may have lost, his ideas did not. They were so powerful that the Republicans adopted them.

I've read Karl Marx. I've studied the totalitarian regimes in the 20th Century and the failed economics of European socialists. And I refuse to see this Party go in that direction. There's going to be a fight for the future of the Republican Party. If we allow it to drift this far to the left, it will die a slow, painful death. One can only imagine the government we will get when that happens.

So what are you going to do about it?

If you are conservative like me and want to defeat the liberal, socialist agenda, YOU MUST speak out against these Republicans who are ruining the Party. I urge you to lash out at your legislators and Congressmen for voting like socialists. Write emails to friends and family. Post on social media. If we do nothing, then we'll get more of this destruction to our Constitutional Republic.

Do not accept the BS line "well this is what we need to do in a time of a crisis". The conservative philosophy has the best solution. We should be drastically reducing our dependence on government by cutting spending, eliminating regulations (like with life saving drugs and manufacturing equipment) and letting families keep their money so they can survive the economic downturn. THIS is the solution and the rightful remedy.

Let your voice be heard:

FIND YOUR LEGISLATOR AND CONGRESSMAN