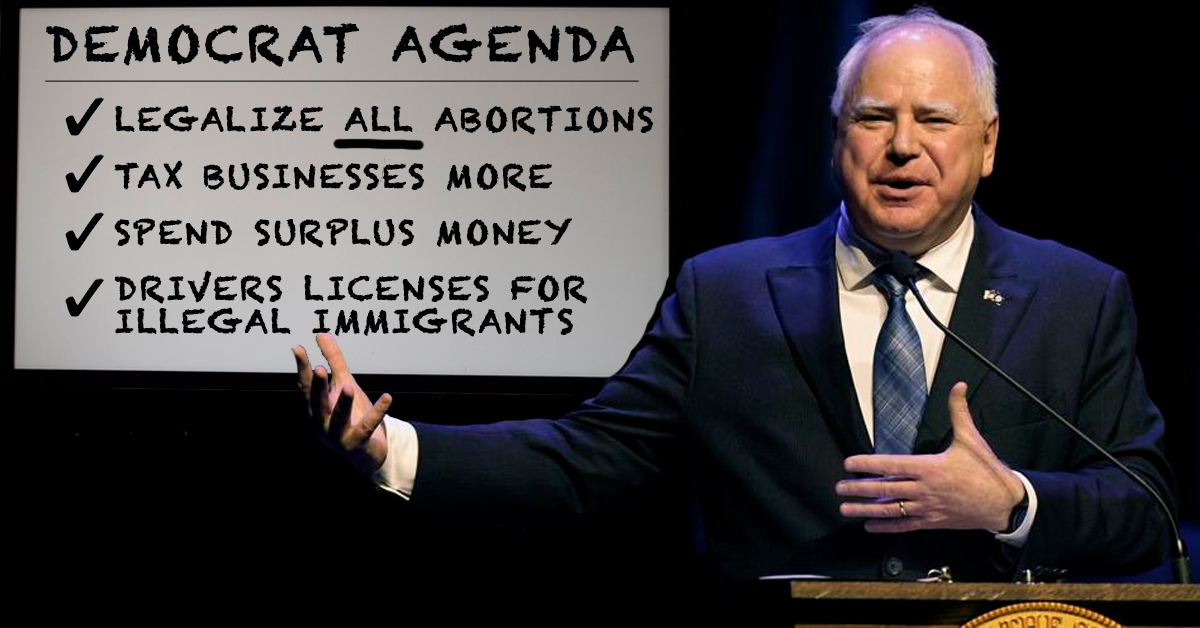 Abortion up until the moment of birth, in all cases, no exceptions, is moving lighting fast in the Minnesota Legislature thanks to Democrats and former Rep Tony Jurgens. Believing they have a mandate from Minnesota voters to codify abortion in all cases into Minnesota law, HF 1 is on a fast track. It's rare to see legislation move this quickly - after all, it's only the third week of the new legislative session.

This legislation is as extreme as it gets. Most voters do not agree that abortion in all cases should be legal. The Democrat bill would allow a mother to kill a 7 lb baby at 39 weeks. A poll conducted last October found that 2/3 of voters think the Democrat position of "no-exceptions abortion" is worse than the Republican's position.

Minnesota Democrat's destruction to the state doesn't stop in the uterus though. In their newly revealed agenda, they are proposing a tax hike on all businesses, large tand small, to pay for a government mandated family leave program. And for the first couple years of the new program, they plan to raid nearly $2 Billion of the record budget surplus that came from overtaxing Minnesota taxpayers.

On the campaign trail, Walz and other Democrats showed support for ending the Social Security tax. Minnesota is one of a handful of states that tax its citizens on social security benefits. But Democrats have reversed course and dropped the effort to remove all social security taxes claiming it would cost them in too much future revenue. Keep in mind, they are overcorrecting revenue by billions already, which is why we have a budget surplus in the first place.

Another bill moving fast at the Capitol is a bill that would allow illegal immigrants to get a driver's license. HF4 allows those who are in our country illegally to get a government issued ID without fear of being penalized for breaking our immigration laws. It also leads to the slippery slope of who can vote in our elections. An illegal immigrant testified in a committee last week and seemingly admitted to committing a felony by voting.

The Democrats also plan to completely uproot Minnesota's entire energy system by 2040. In HF7, they want to be fossil fuel free in 17 years, which will without doubt hurt Minnesota's economy and eventually lead to climate related deaths as the so-called "clean energy" infrastructure will not be able to heat homes in Minnesota's harsh winters. In just 7 years, they want 80 percent of Minnesota's grid to be fossil fuel free. Only 28% of the electricity from Minnesota's grid today comes from renewable sources. Unless Democrats are advocating for nuclear energy (they aren't), this energy policy will be disastrous for the state.

What's absent in the Democrat agenda is an expedited desire to return the budget surplus to taxpayers. The state government could issue a $6,000 check right now to return the overtaxed money, but there's no motion at the Capitol to return a dime of it. Walz has stated he wanted to return a fraction of it back ($1,000 to everyone, taxpayer or not). However, it doesn't appear Walz has many allies in the House and Senate Democrat caucuses.